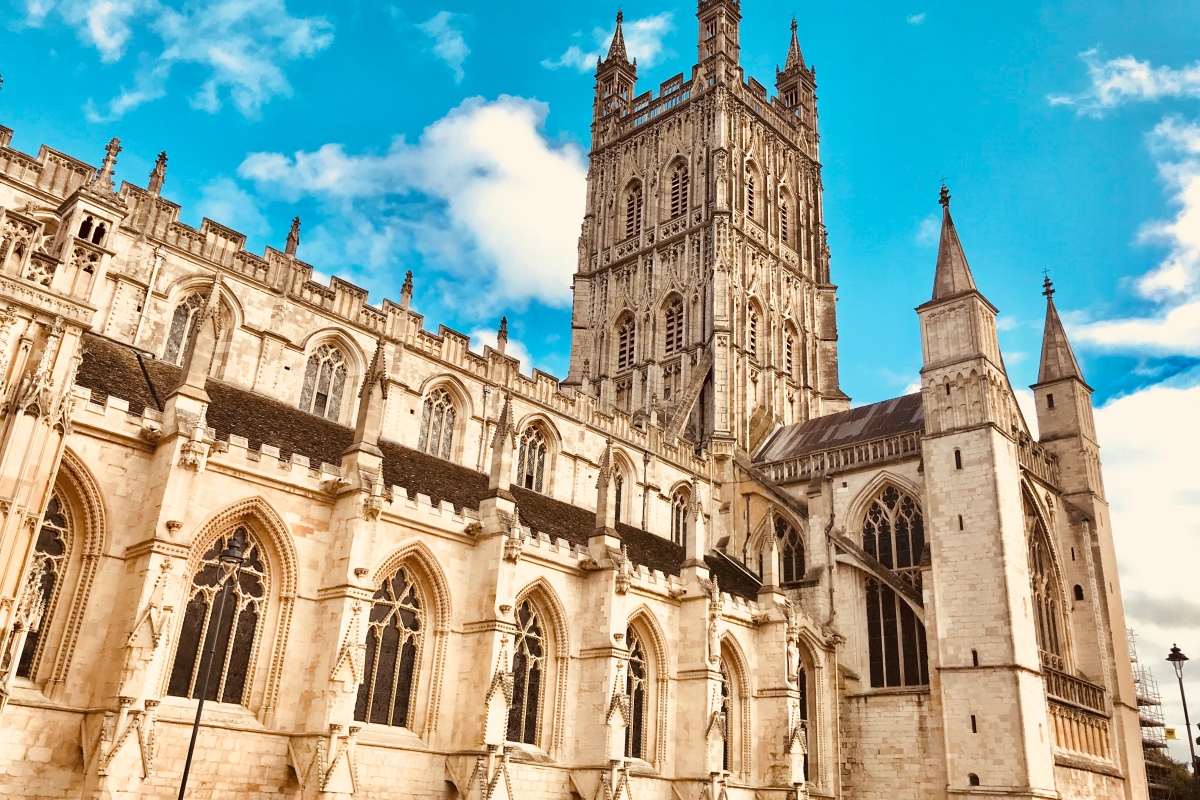 I am very ashamed to say that I have lived in Gloucester all my life however have only visited Gloucester Cathedral on three occasions! The first occasion doesn’t even really count as I am pretty sure I was only in junior school, and so I don’t remember much of it!

The cathedral originated around 678/679 with an abbey which was dedicated to Saint Peter. The abbey was later dissolved by Henry VIII. The cathedral as it currently stands was build in Romanesque and Gothic style between the years 1089 and 1499.

An interesting fact – one of the stained glass windows in the cathedral shows one of the earliest images of golf! This window dates back from 1350 which is over 300 years before the images of golf appeared in Scotland.

As with most Cathedrals these days, there is no entrance fee and tickets aren’t required, however there is a donation box for you to leave what you would like to show your support.

If you would like to take photos inside the cathedral – whether this be with a camera or on your phone, you need to buy a ticket for £2 and you will be provided with a sticker to wear to show you have paid to take photos. I thought this was a really good idea, until the lady serving me said that they often find this policy to be abused, particularly by those taking photographs on their phone, which I thought was awful!

£2 to take photos of this incredible place was well worth it, and it’s nice to know all of this money will be put back into the restoration and upkeep of the cathedral. 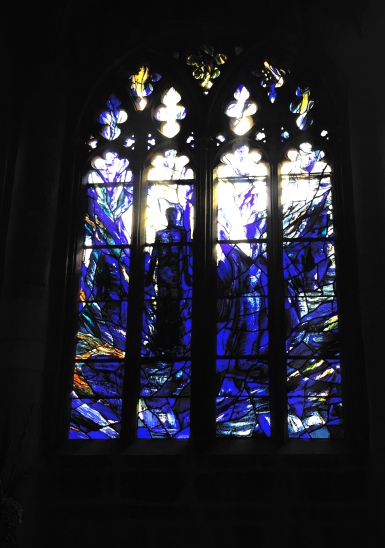 You may find Gloucester Cathedral to be very familiar after seeing it appear as a filming location for three of the Harry Potter films, Sherlock Holmes (The Abominable Bride scene at the end where Sherlock and Watson are in the ruins of a desanctified church) and the Doctor Who Christmas special!

The beautiful cloisters of Gloucester Cathedral are particularly memorable from the Harry Potter films! 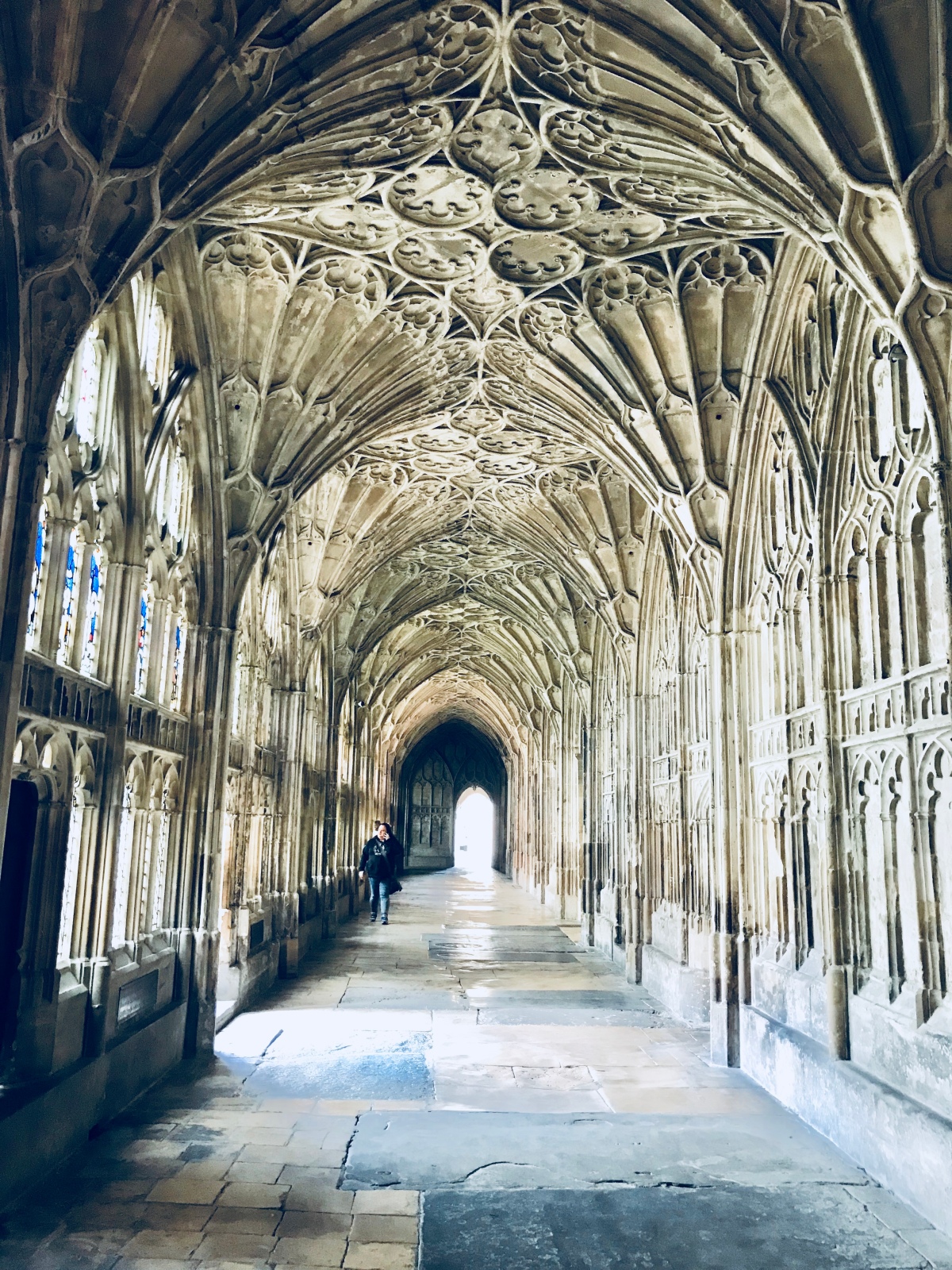 Inside Gloucester Cathedral you will find some famous historical tombs, including;

Osric, King of the Anglo-Saxon kingdom of the Hwicce.

Osric is claimed as the founder of two monastic houses, one at Bath (now Bath Abbey) and the other here at Gloucester Cathedral.

Robert Curthose, Duke of Normandy and the eldest son of William the Conqueror.

He died in 1134 at Cardiff Castle, a prisoner of his youngest brother, King Henry I. The exact place of his burial is difficult to establish, however legend states that he requested to be buried before the High Altar.

Born in 1284 and reigned from 1307 to 1327. The King’s funeral was held on 20 December 1327 and his coffin was placed under the floor. Sometime afterwards, presumably on the orders of his son, King Edward III, this stunning tomb was built over it. The canopy was carved from local Cotswold limestone and the base is covered with Purbeck marble. The King is depicted as a saintly figure with angels at his head; he holds a sceptre and an orb – the first time the orb appears on an English royal tomb. 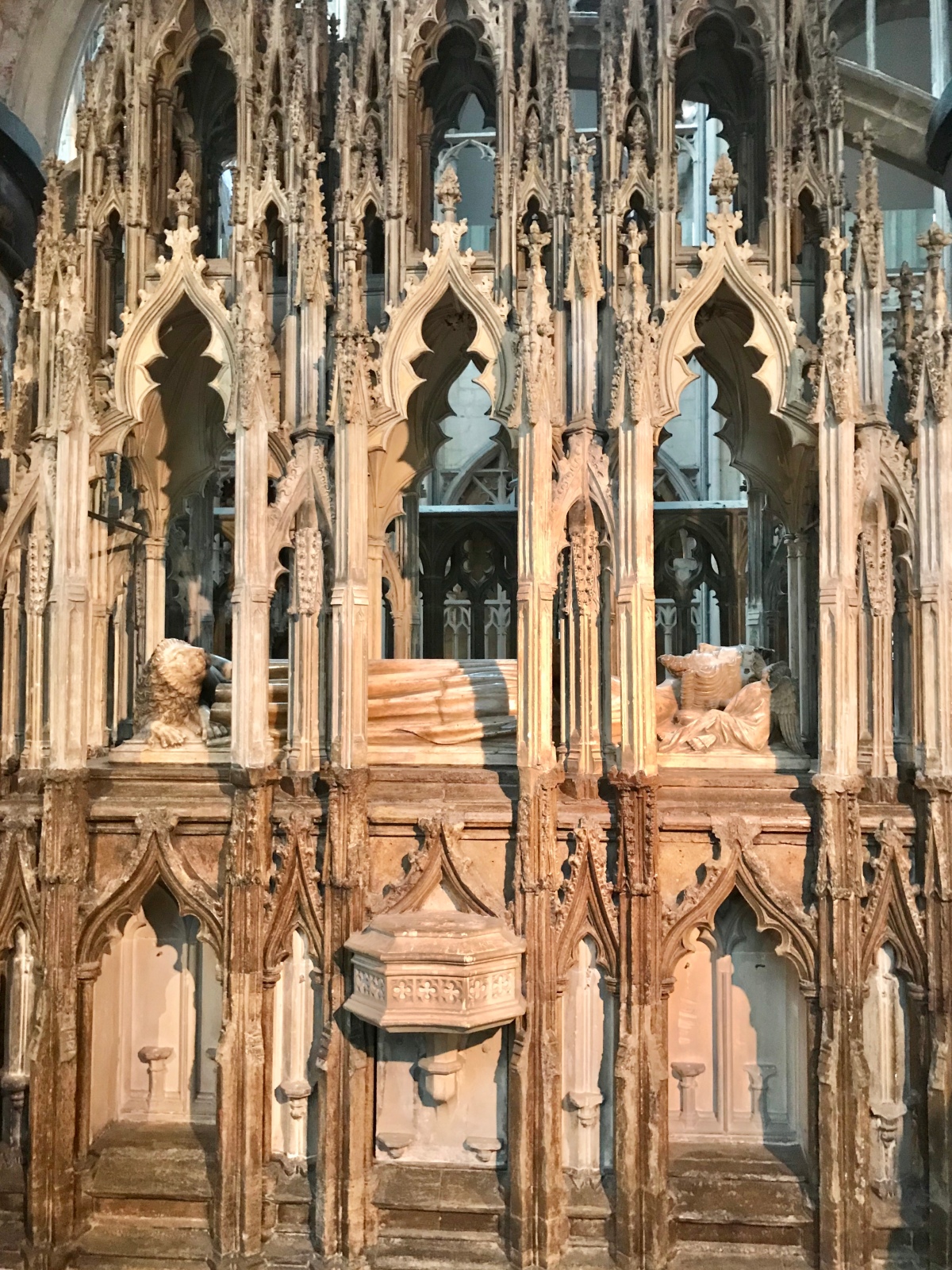 Once you have had a good look inside,  I highly recommend you take part in one of their tours to the crypt! The tours run quite often and you can’t go down there unsupervised because it is dark, but my sister and I paid a visit and absolutely loved it! 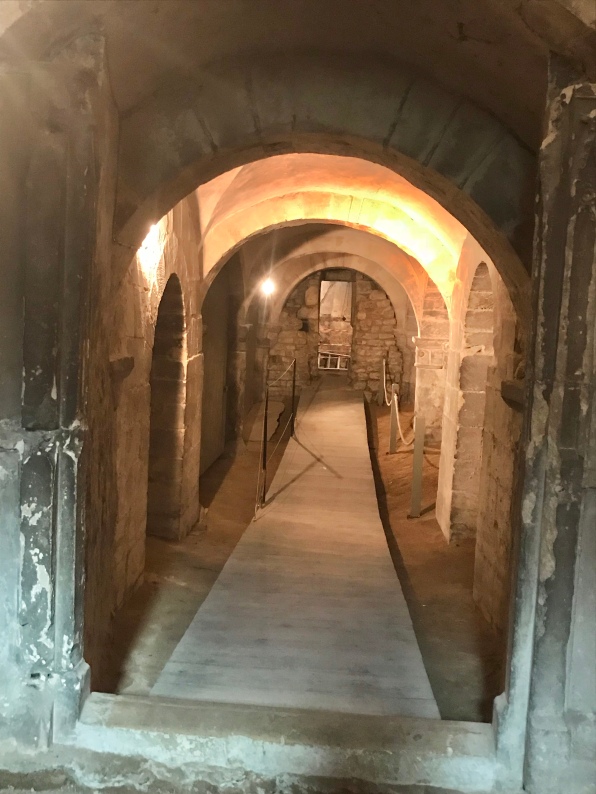 Our tour guide was fantastic and we learned so much about the history of the crypt, and of the Cathedral itself. You can buy tickets in the shop at the front of the cathedral – tickets are £3 each and the tours last around 20 minutes. 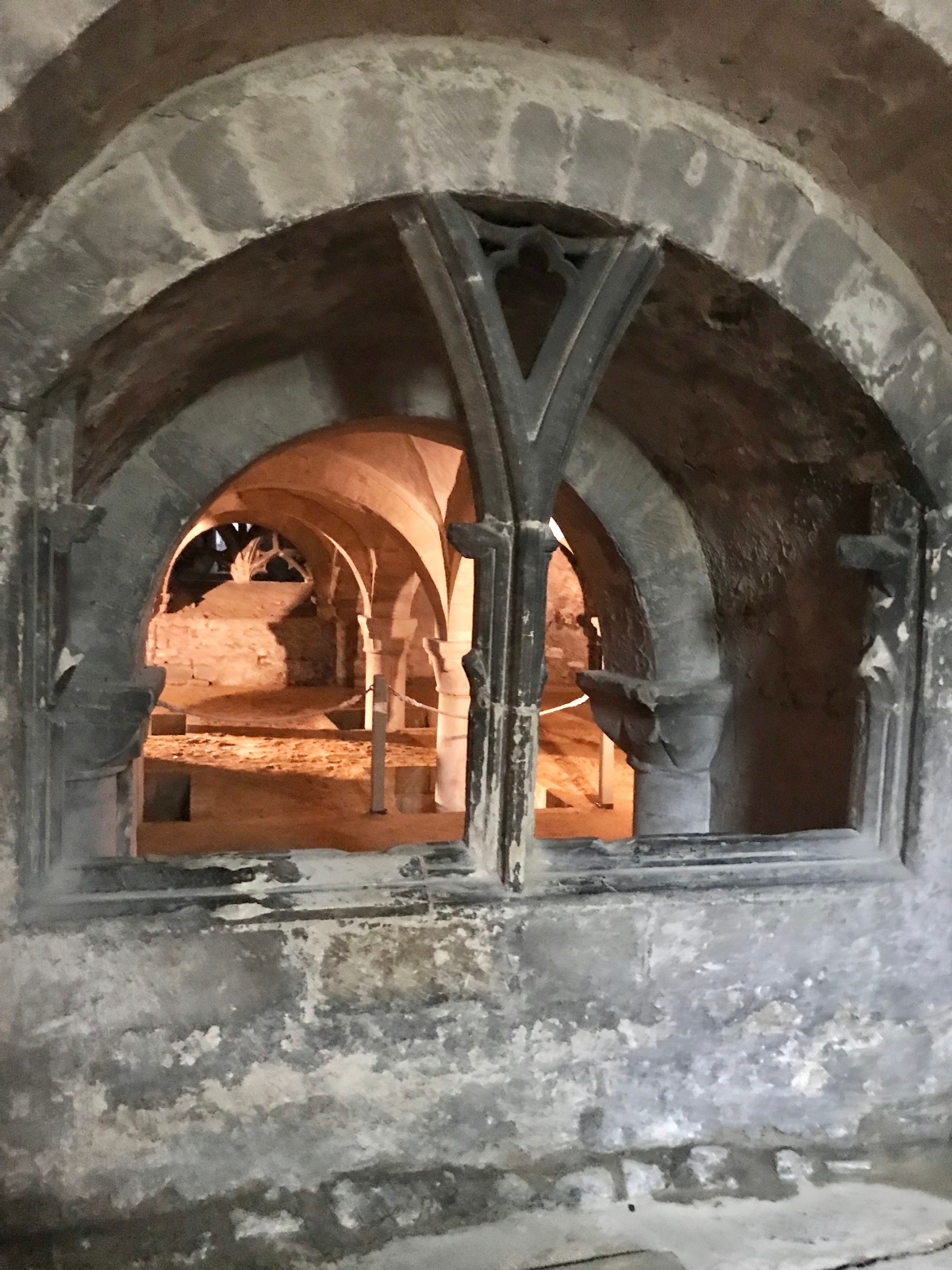 The crypt at Gloucester Cathedral is one of very few Norman crypts in the country and was used for praying, funerals and even to hide valuables during times of war and conflict. If you search for information about the crypt of Gloucester Cathedral you won’t find much, basically because so little is known about this mesmerising place! 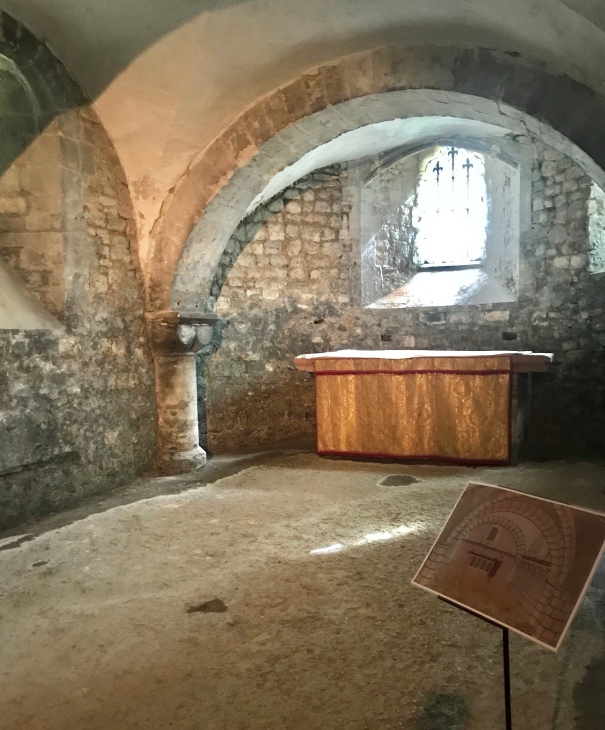 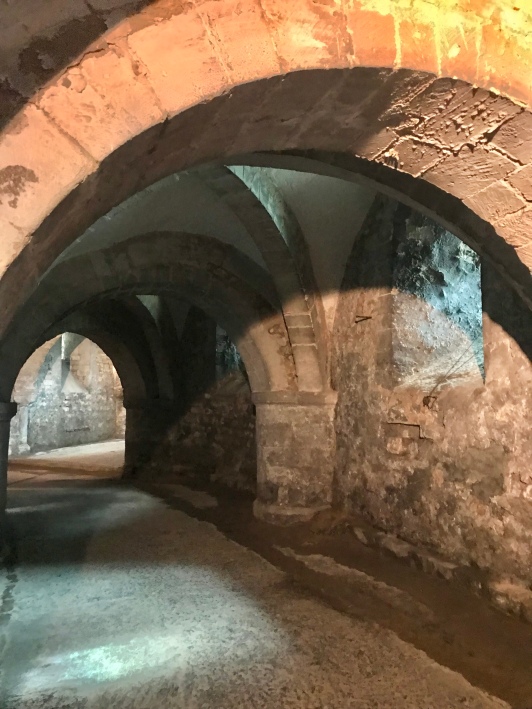 We are usually very lucky with the weather on most of our family day trips out, and our visit to Gloucester Cathedral was no exception! We chose a beautiful bright and sunny day which meant we could get some great photos of this stunning building.

The only downside was that we visited when there is vast building work taking place outside the front of the building to design a new garden, so I had to do my best to crop the diggers and high fences out of my photos!

If you are hoping to visit when there isn’t any form of building work going on then you will have a while to wait! Project Pilgrim is a huge project which is taking place over an approximate ten year period!

The project is split into several different phases as follows:

The external re-landscaping will create (amongst other things) level access to the West door, provide more disabled car parking spaces and add a green space with plants and trees.

This phase will include the creation of a new glass entrance lobby and glass cloister door, and a new welcome area which is going to include a lovely glass model of the Cathedral to help visitors navigate their way around – I’m looking forward to seeing this!

This 15th Century area of the Cathedral will have major restoration and conservation work done which includes new lintels, new lighting, cleaning of the stonework and stain glass windows and installation of new radiators and underfloor heating.  Work is also being done to the external walls of the Lady Chapel including restoration and conservation of the existing stonework.

There are also some lovely shops and tea rooms in the surrounding area of the Cathedral, including a Beatrix Potter shop which is well worth paying a visit! The Cathedral is also within walking distance of Gloucester Quays where you can find a shopping centre, loads of restaurants and brilliant themed food fayres throughout the year! 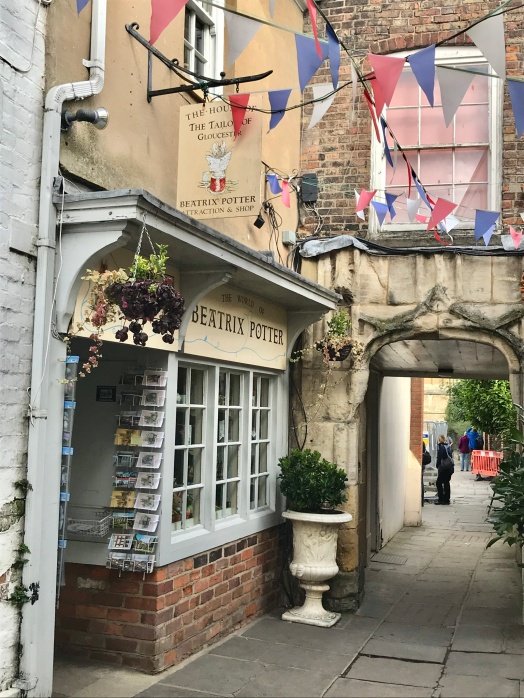 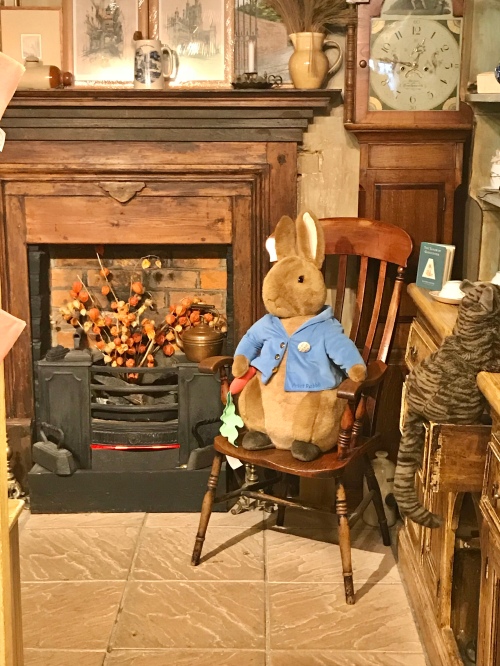