Tewkesbury isn’t too far away from me but is another place I have never visited! I had a week off over my Birthday and thought this would be the perfect opportunity to have a long overdue trip to this beautiful historic river-side town. 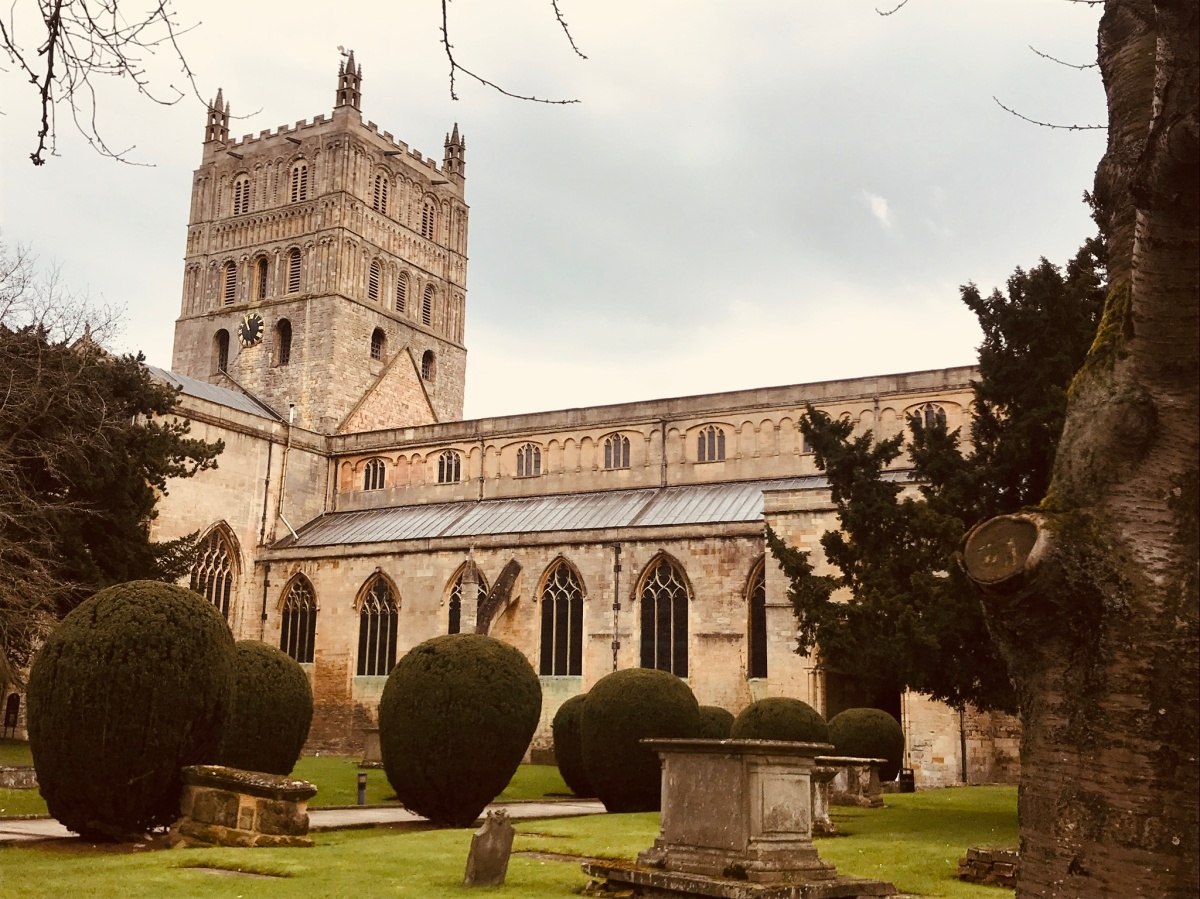 The main thing I wanted to see was Tewkesbury Abbey. It was such a shame about the weather – it was grey and overcast and drizzly and really cold! I should think this building looks even more spectacular with the sun beaming down on it!

The correct name of Tewkesbury Abbey is The Abbey Church of St Mary the Virgin. There has been a church situated here at this site since Saxon times, and the church is even mentioned in the Doomsday book, surveyed during 1086. 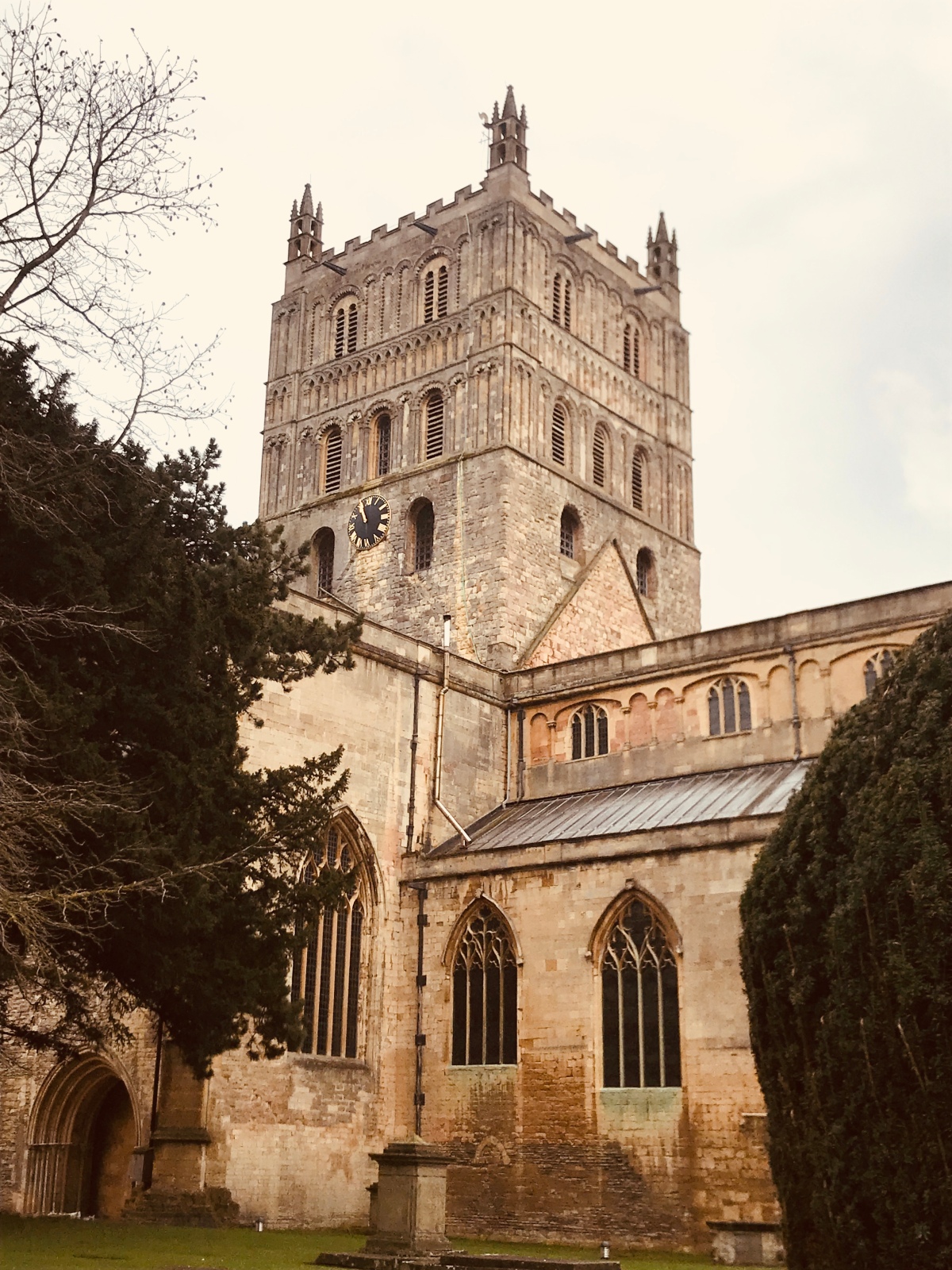 King William II (aka William the Conqueror) gave the Manor of Tewkesbury to Robert Fitzhamon, who was a soldier and a great and loyal friend to the King. He and his wife, Sybil de Montgomery, founded the Abbey and brought Abbot Gerald and his monks here from the failing abbey of Cranbourne in Dorset to form the new monastery.

When Fitzhamon died in 1107 from wounds sustained in the Battle of Falaise two years earlier, his body was buried in the Abbey’s chapter house. Building work continued by his daughter Mabel and her husband Robert Fitzroy, who was the eldest illegitimate son of King Henry. The Abbey was consecrated in 1121.

The Abbey itself has some amazing Norman features including the arch and stunning turrets. The quire and transepts were probably the earliest examples of a three-storeyed building in Europe. The tower was created in the late 12th Century and and is the largest and finest Romanesque tower in the world. The tower is 14 metres square and 46 metres high.

In medieval times the Abbey would have looked very different – everywhere would have been painted in strikingly bright colours and patterns and biblical patterns, but there is hardly any trace of this within the Abbey today.

The original Norman ceiling in the nave was higher than the one here today and was more than likely made of wood. It was replaced in the 14th Century with stone in the Gothic rib vaulting styling.

The photograph below on the right shows the vaulting upside down as it is a reflection in a cleverly placed mirror so you can admire the detail without hurting your neck straining to look upwards! It is such a stunning vaulted ceiling.

For nearly 300 years, three successive medieval families were the patrons of Tewkesbury Abbey. When the Fitzhamon’s grandson, William, passed away the Abbey devolved through his daughter and into her husbands family, the de Clare’s. The patronage was then inherited by Gilbert de Clare’s daughter, Eleanor, and her husband, Hugh le Despenser II. In around 1320 the Despensers began to modernise the abbey. This work was halted temporarily when Hugh was executed for treason in 1326. Eleanor built a beautiful tomb for Hugh, which can be seen in the Abbey today. Eleanor and her son, Hugh le Despenser III, continued work on updating the abbey, including raising the nave roof and adding the beautiful nave vaulting. The high altar, presbytery and quire were transformed and new stained glass windows were added.

Lord Edward Despenser, Hugh Despenser III’s nephew and heir, is commemorated in the beautiful chantry chapel, commissioned by his widow, Elizabeth Burghersh. This is the oldest of the three chapels and has a beautiful fan vaulted ceiling and a statue of Lord Edward on the roof. Unfortunately because of it’s position, you cant get close enough to see the detail which is a real shame.

The patronage was then passed to Isabella Despenser following the deaths of her brother and father. She built the most elaborate of the Abbey’s chantry chapels in memory of her first husband, Richard Beauchamp, Earl of Worcester, who died in battled aged only 22.

Richard Neville became Earl of Warwick and Lord of Tewkesbury when he married Anne Beauchamp, the daughter and heir of Isabella and Richard. Richard Neville was known as the “Kingmaker” due to his influence and power.

Richard’s support was critical in the overthrowing of Henry VI and the crowning of Edward IV, however Richard and King Edward IV fell out soon after. Richard later travelled to France and was persuaded to make peace with the Lancastrians and provide his support in restoring Henry VI to the throne. Richard was defeated and killed in the Battle of Barnet in April 1471 when Edward returned to England from exile.

Henry VI’s queen, Margaret of Anjou, came back from France with her son Edward, Prince of Wales and was persuaded to stay and fight for her son’s inheritance. Her plans to combine the two groups in Gloucester were foiled when the Yorkist constable of Gloucester castle prevented their entry into the city. She had no choice but to follow the course of the River Severn, which resulted in her arrival in Tewkesbury on the 3rd May 1471.

On the 4th May 1471, a battle ensued known as the Battle of Tewkesbury. The Lancastrians were forced to retreat towards the town of Tewkesbury, and many sought shelter within the Abbey. It is said that the Yorkist’s pursued them inside the Abbey with swords. At the time, Abbot Strensham was celebrating mass at the high altar. He challenged Edward and his brothers and demanded that the troops did not defile the church with such slaughter and bloodshed. The King withdrew as requested but the Abbot was unable to argue that the Abbey was a place to grant sanctuary, and the Lancastrians were handed over to King Edward. The resulting bloodshed closed the building for a month sop it could be purified and re-consecrated.

There is a brass plate in the floor in the sanctuary which marks the grave of Edward of Westminster, Prince of Wales, the son of King Henry VI, and the end of the Lancastrian bloodline. He was killed during the Battle of Tewkesbury, was the only Prince of Wales to ever die in battle, and was only 17 at the time of his death.

After the battle, the monks of Tewkesbury are rumoured to have picked up pieces of horse armour from the battlefield which they hammered flat to strengthen the door of the sacristy.

Between 1536 and 1541, to assert his authority as head of the Church in England, Henry VIII disbanded the monastic houses of England and seized all their lands and possessions. Tewkesbury Abbey was finally surrendered to the Commissioners in January 1540. The Commissioners ordered the dismantling of some of the monastic buildings.

The townsfolk of Tewkesbury later petitioned the commissioners to be able to buy the church building. The price paid was £483, which was the value of the lead on the roof and the metal in the bells.

The eastern exterior of the Abbey is my favourite view of this beautiful building. It is marked in the grass where the 14th Century Lady Chapel once stood.

Also keep a look out for the two storey gatehouse, known in the 15th Century as “the grate gate”. This is one of three entrances like this and is thought to have been the monastery’s inner gate.

As Tewkesbury is a river-side town, it unfortunately often sees the effects of flooding. The Abbey itself has flooded twice during severe floods in 1760, and more recently on 23rd July during the 2007 floods. There were signs of flooding during our visit, and no doubt the heavy rain over the past few weeks has not made the situation any better….

If you are visiting Tewkesbury for the day I would also recommend paying the town centre a visit. Along Church Street you will find some beautiful half timbered buildings which are worth admiring! 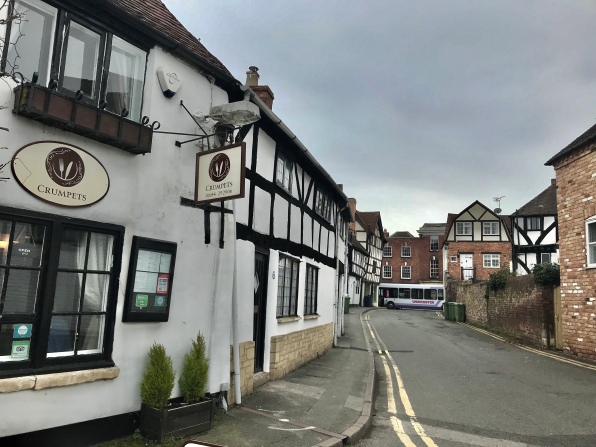 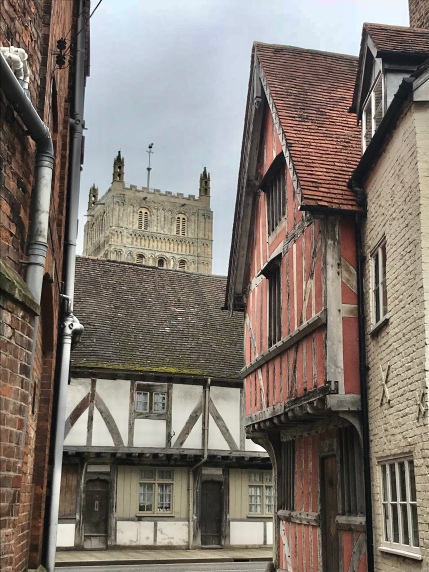 A really lovely place, I am already looking forward to re-visiting. We had hoped to do a little boat trip up the River Severn but after a couple of hours walking around in the cold, wet weather we were really for some lunch and a hot chocolate!  Hopefully the next time we go, the weather will be a bit warmer and we can enjoy a little boat trip to see more of the sights Tewkesbury has to offer!