Hello fellow travellers and wanderers! Welcome to my latest travel blog which is about the Mardi Gras celebrations in New Orleans!

I have always wanted to go and see the Mardi Gras parades and spend time in New Orleans – amazing history, culture, architecture, food and one of the biggest celebrations on the planet – what more could you want in a destination??

We arrived in New Orleans the day before Mardi Gras (otherwise known as Lundi Gras) and the streets were already alive with people preparing for the big day. We ventured out in the early evening to watch the Uptown Route parades and the streets were already really crowded. We thought we wouldn’t have the opportunity to see much but every  person we encountered was so friendly! People moved aside and made space for us to see the floats going past, and a couple of hours into the evening there was a group of eight of us who stuck together and took it in turns to buy rounds of the world famous Hurricane cocktails!

One of the most well known Mardi Gras traditions is the throwing of beads and other trinkets.  The throwing of trinkets to the crowds was started in the early 1870s by the Twelfth Night Revelers and as well as beads, throws include doubloons, cups, stuffed toys and even coconuts! Doubloons are aluminum coins and come in many different colours. They depict the parade theme on one side and the Krewe’s emblem on the other and are collectors items, particularly ones from the Bacchus parade which includes the image of the celebrity king on one side! By the end of the evening we were already laden down with a huge stash of beads, cups, and doubloons! Check out just some of the stash we came away with: 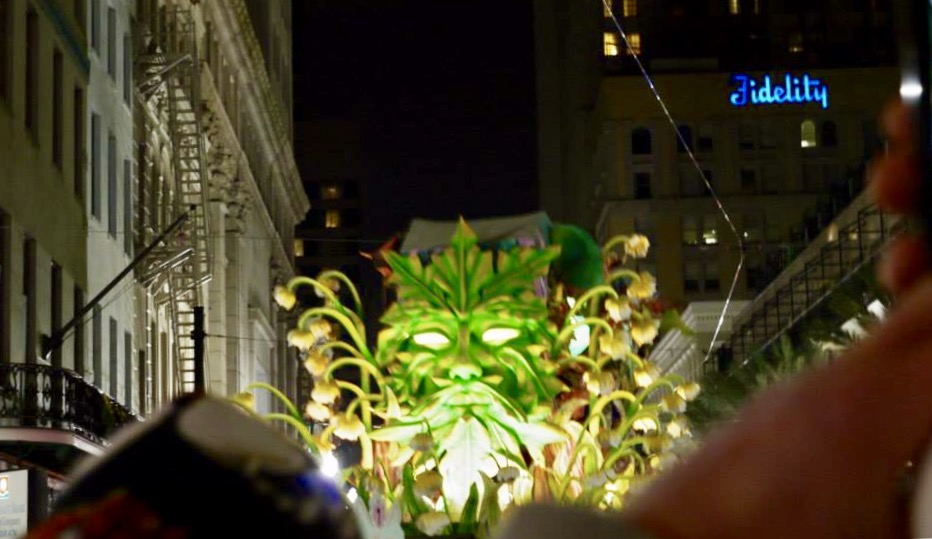 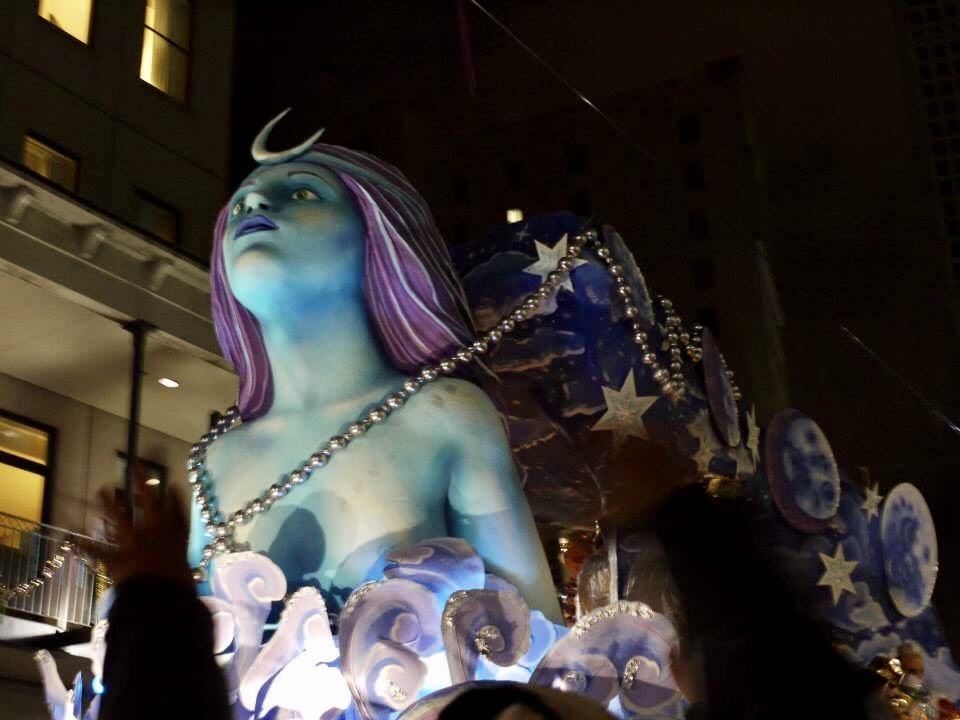 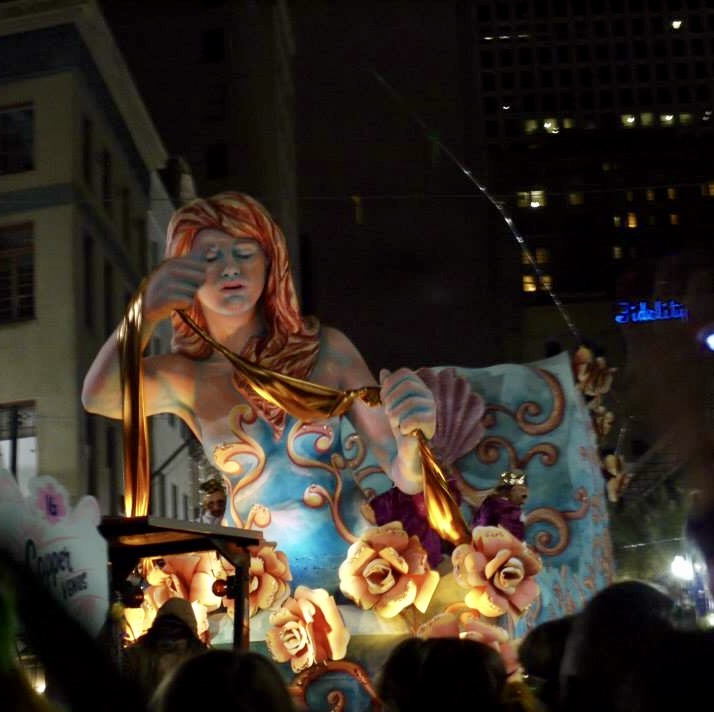 After a rather long cocktail filled evening we crawled back to the hotel to prepare for next day’s big event!

We were up nice and early for the day’s celebrations – we had pre-booked tickets at the Royal Grandstand in Lafayette Square on St Charles Avenue, directly opposite the Gallier Hall. Tickets were $50 per person but it meant we had a great view of the parades and for an extra $5 each we were given VIP access which included easy access to toilets (you’ll understand how important this is if you ever get the chance to go!). 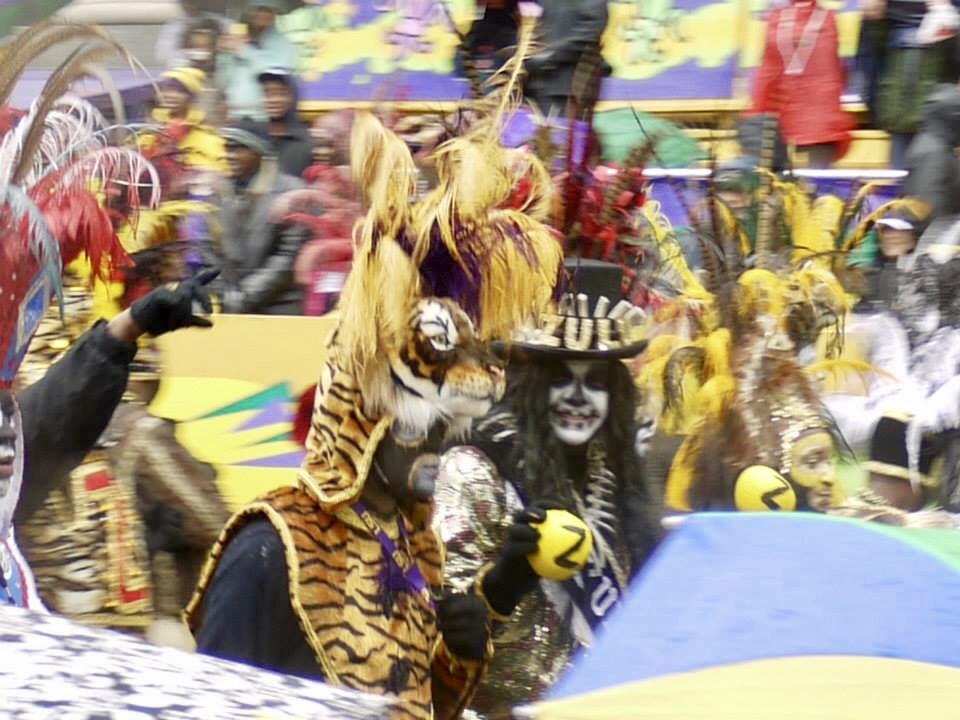 The parades started early (around 8:00am) and Mardi Gras starts with the Zulu Parade (keep your eyes peeled for the very special most-prized golden coconuts which are handed out as part of this parade!). “King of Carnival” Rex follows the Zulu parade and is the oldest Krewe of New Orleans and also the founder of the Mardi Gras colours of purple (justice) green (faith) and gold (power). Following Rex was the Truck Krewes of Elks and Crescent City. 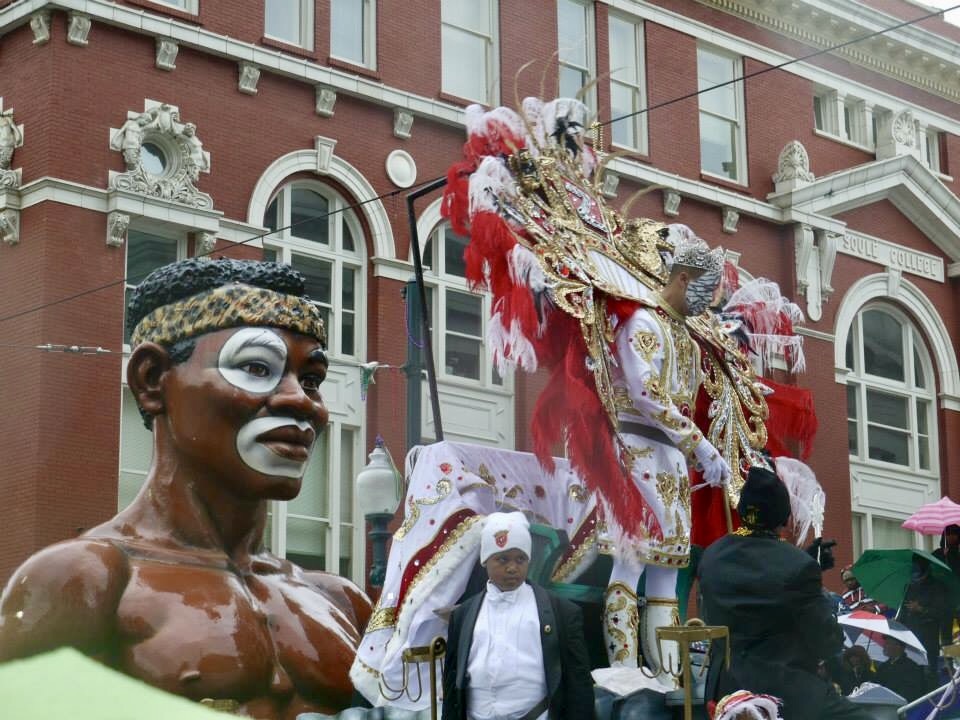 After watching the amazing parades we ventured over to the French Quarter to continue the celebrations – if you are a cocktail fan then this is the place for you! Try one of New Orleans’ famous Hurricanes and be sure to have a Jester Mardi Gras Daiquiri – any flavour daiquiri you would like served in an amazing Jester cup! Other drinking options in this part of town include “the strongest cocktail in the world” – so take things steady!

Things were relatively quiet this year in general as unfortunately the year we chose to go  was the coldest year for 100 years! A couple of extra jackets were bought and as you can see from the pictures, the streets were rather empty and the umbrellas and waterproofs were out!

The majority of people who attend Mardi Gras wear masks during the celebrations and float riders are required to wear masks by law! During our wander around the streets of New Orleans we came across some amazing shops selling the most beautiful array of masks, ranging from simple to elaborate! Some places also sell handmade Italian masks created in the old traditional Venetian style. I had to have one, it would be rude not to! 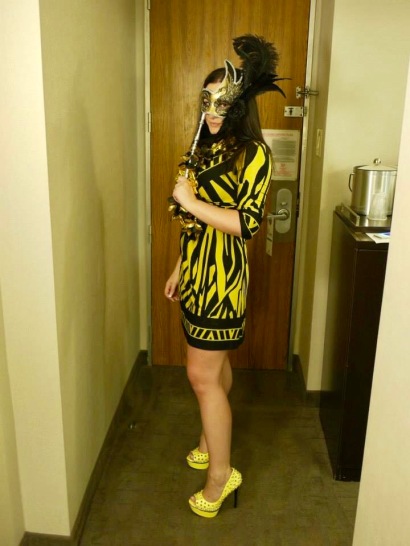 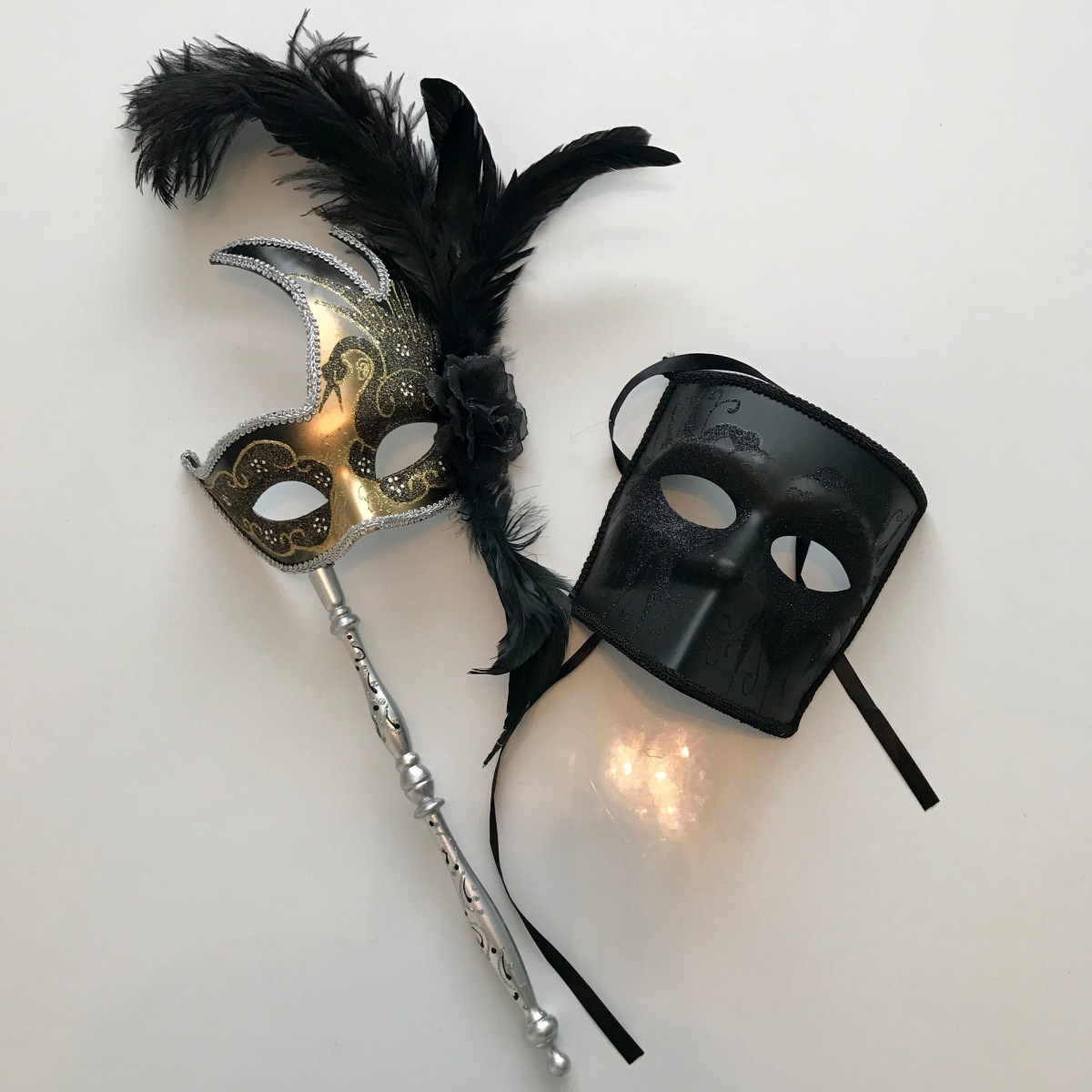 Another tradition I knew I wanted to partake in was to try a King Cake!

As part of New Orleans’s Christian faith, the coming of the wise men bearing gifts to the Christ Child is celebrated twelve days after Christmas. We refer to this as the Feast of the Epiphany, or Little Christmas on the Twelfth Night. Today, the tradition continues as people all over the world gather for festive Twelfth Night celebrations. A popular custom was and still is the baking of a special cake in honor of the three kings, called “A King’s Cake.”

Each king cake has a tiny baby inside (generally plastic now, but it’s possible the baby might be made of porcelain or even gold). The tradition of King Cake Parties have evolved over time, and the “lucky” person who receives the slice of cake with the baby is asked to continue the festivities by having the next King Cake party (or at least purchasing the next cake for the office!).

Originally, king cakes were a simple ring of dough with a small amount of decoration. Today’s king cakes are much more festive. After the rich Danish dough is braided and baked, the “baby” is inserted. The top of the ring or oval cake is then covered with delicious sugar toppings in the traditional Mardi Gras colors of purple, green and gold.

They were sold out in most places but I finally managed to get my hands on one! Yummy! 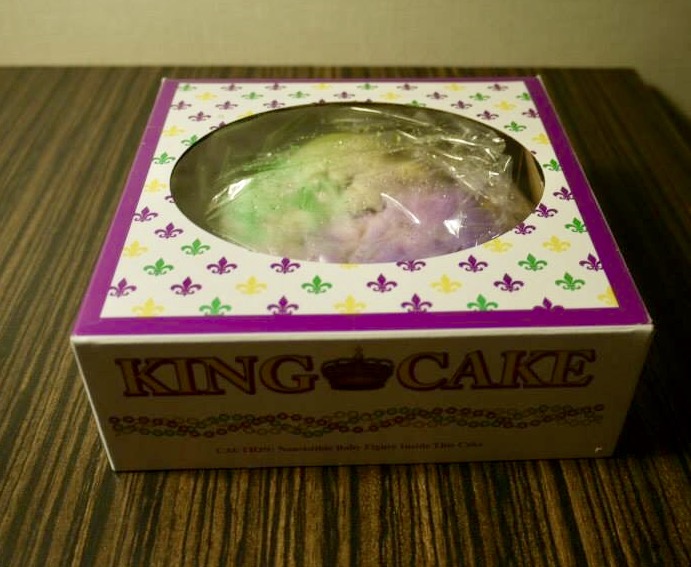 I would love to go back, I loved it so much but also hopefully the next time the weather wouldn’t be freezing and throwing it down with rain!!! Despite the dreadful weather, this was one of my all time favourite trips and favourite destination!