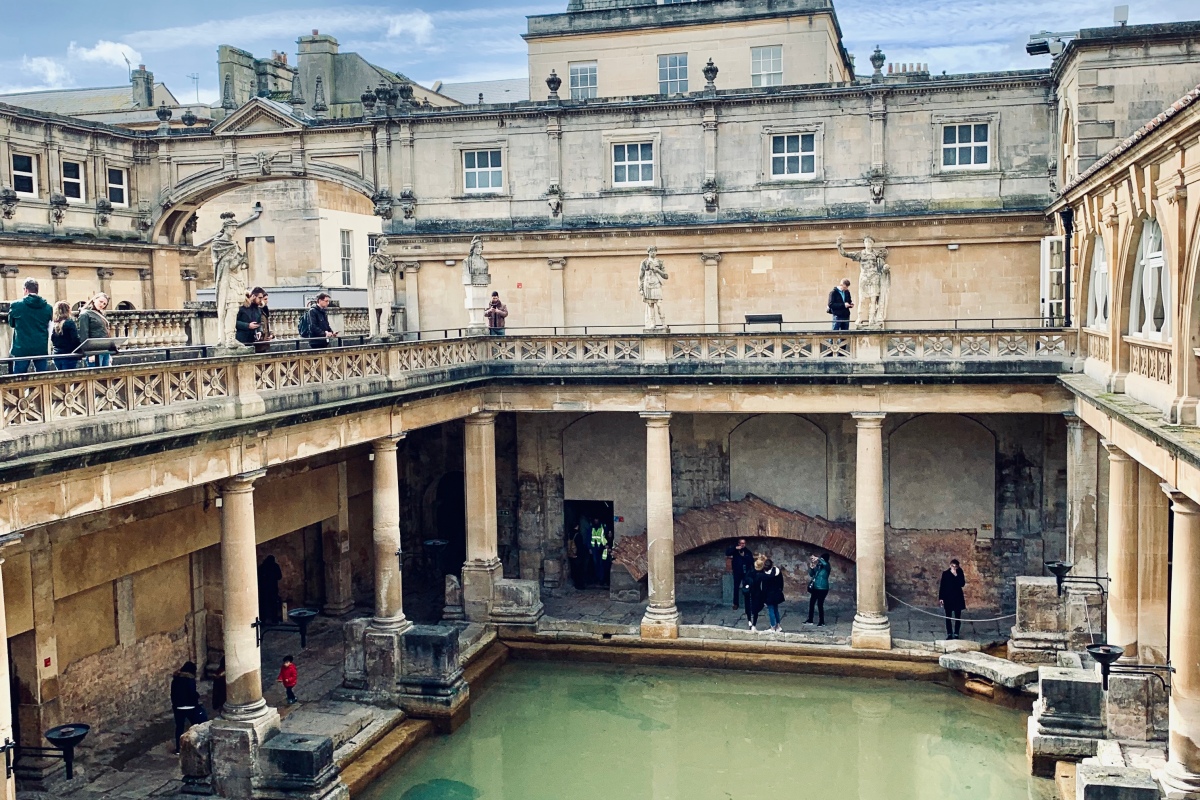 Hopefully you’ve read my blog about Sally Lunn’s Bakehouse after my recent trip to Bath. Of course, although I usually centre my trips completely around food and drink, one of the main reasons I wanted to visit this fantastic city was the famous Roman Baths!

I honestly had no idea how much was here before I planned my visit! I really thought you just walked in and saw the main bath area and that was it! You could literally spend all day and more here!

You walk out onto the terrace first of all which looks down over the main swimming bath. The terrace was completed in 1897 when the Roman Baths first opened to the public. The main swimming bath is just one part of the whole site, which consists of extensive baths, a temple complex and even hot springs. 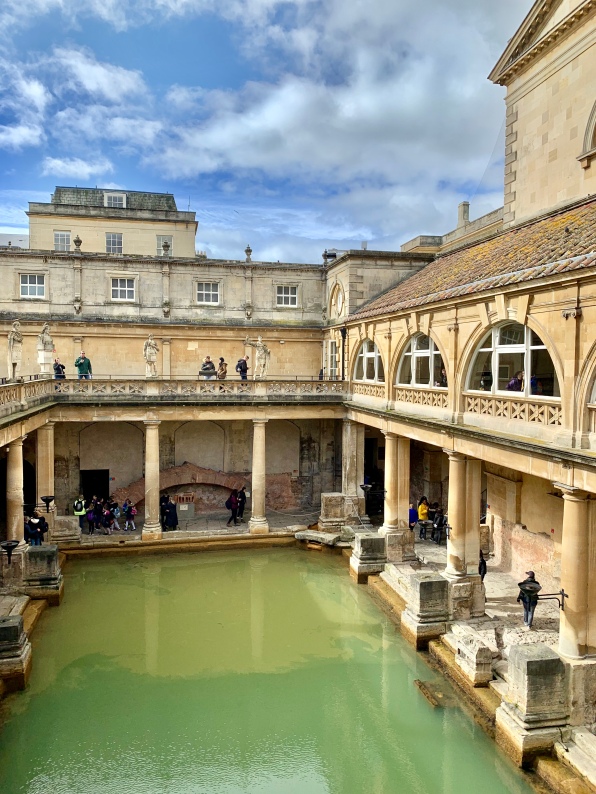 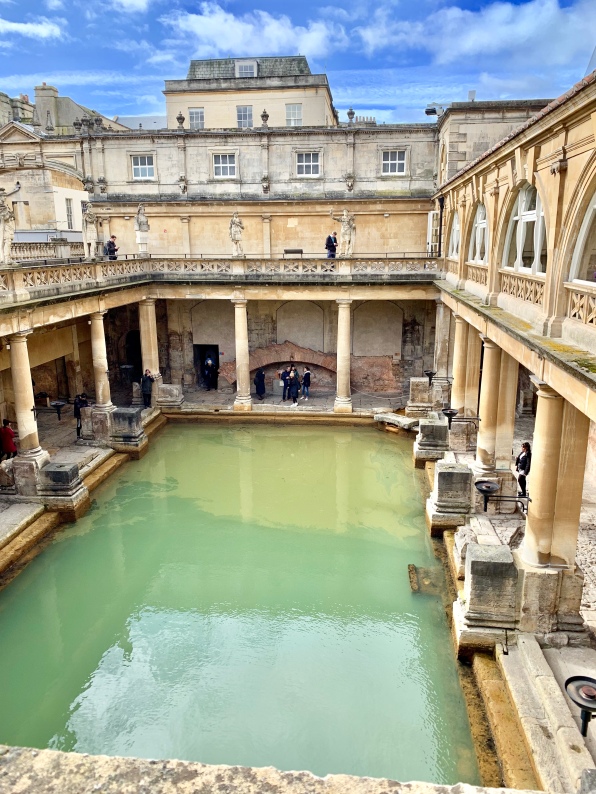 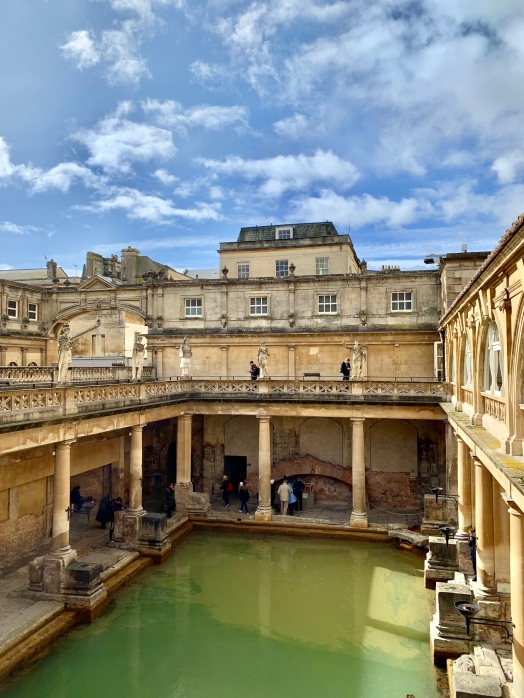 Along this terrace you can see statues of Roman Governors of the province of Brittania (as Britain was known then), and Roman Emperors who had particular connections to Britain. The statues include Julius Caesar, Claudius, Hadrian and Constantine the Great. 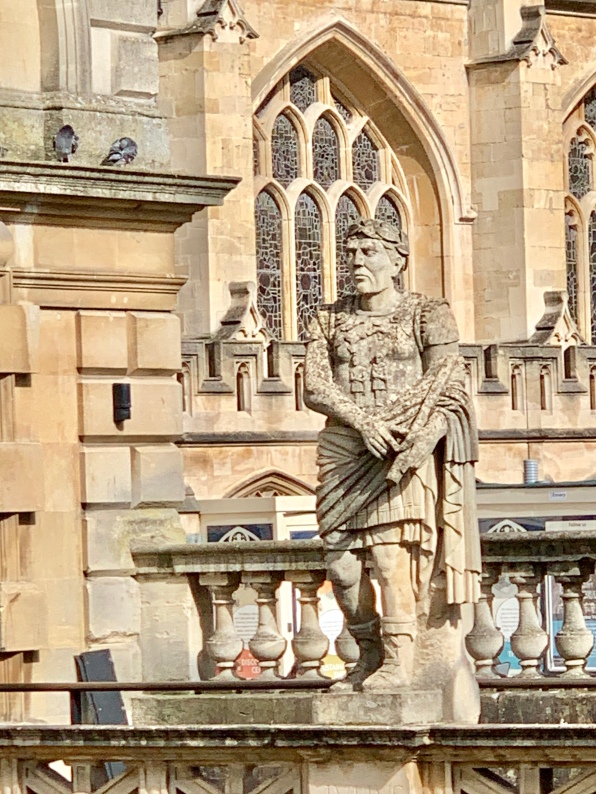 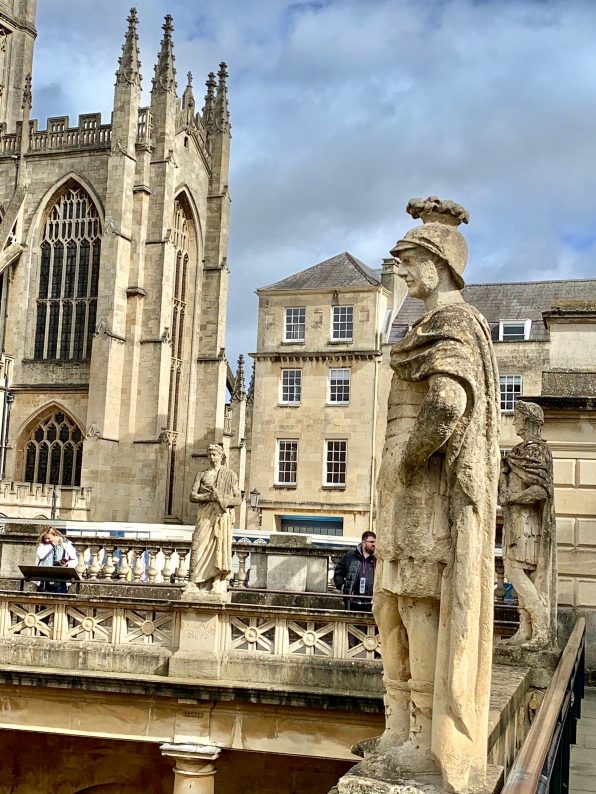 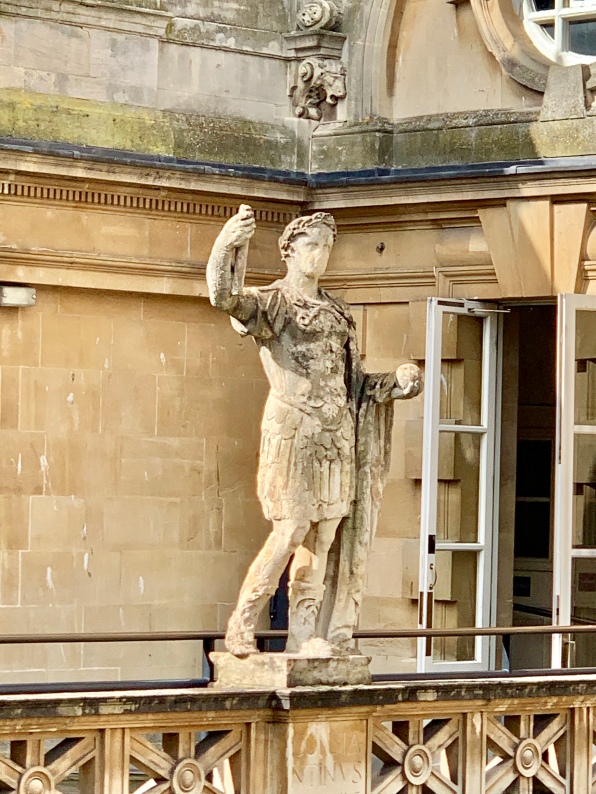 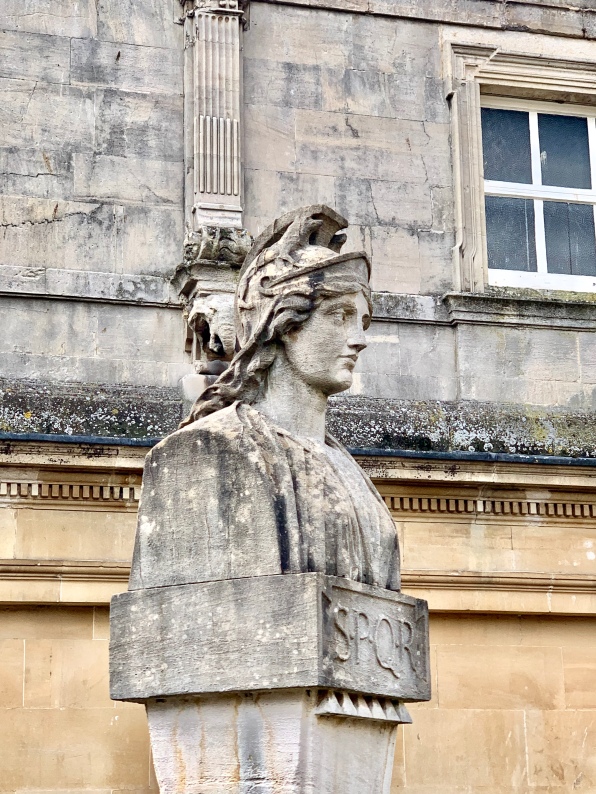 You will next see the Hot Spring – the hot water in the Spring rises at a rate of 1,170,000 litres each day at 46 degrees! It bubbles up into the Kings Bath which was built in the 12th Century AD. Beneath the Kings Bath is a reservoir built by Roman engineers who used the hot water to supply the baths. 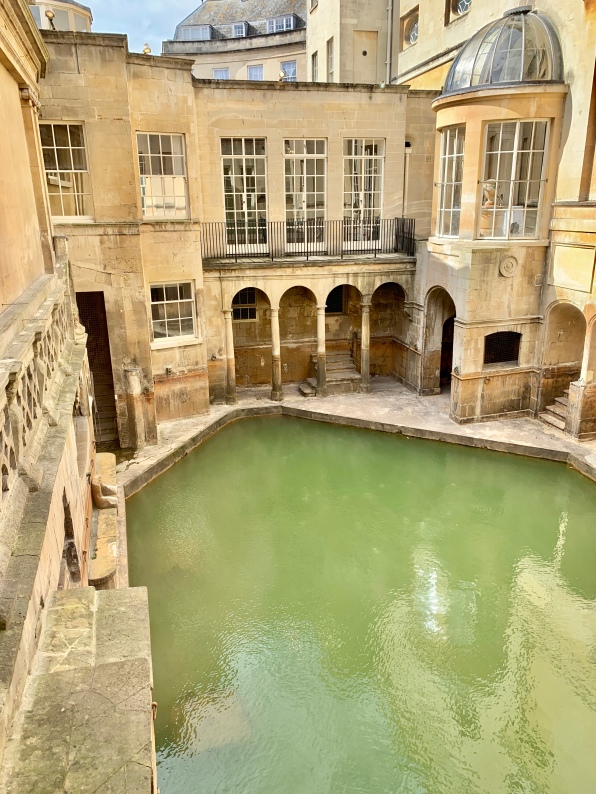 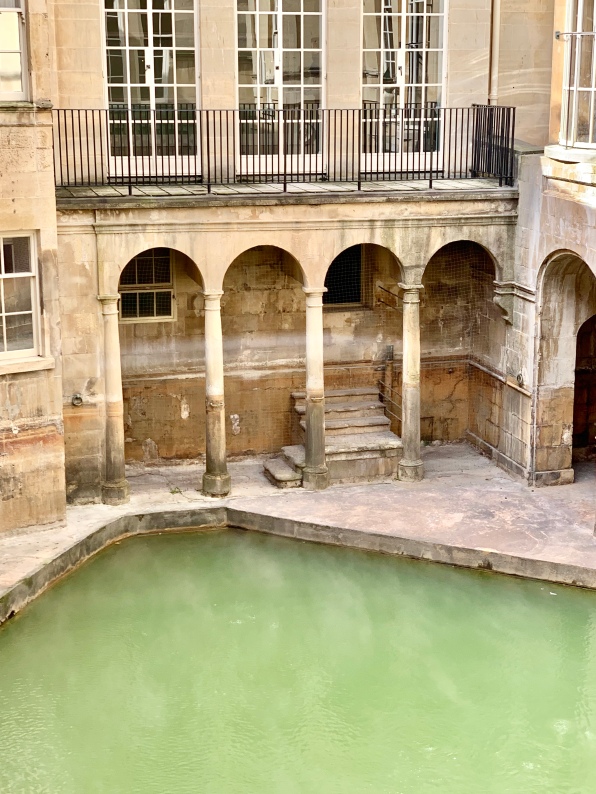 As you continue you come across the beautiful Temple Pediment. This was the front of the temple of Sulis Minerva and was supported by four huge columns. The Temple looked down on visitors in the Temple Courtyard from a height of 15 metres. Lights shining on the Temple show the colours and designs it would have had back then and it is absolutely stunning. 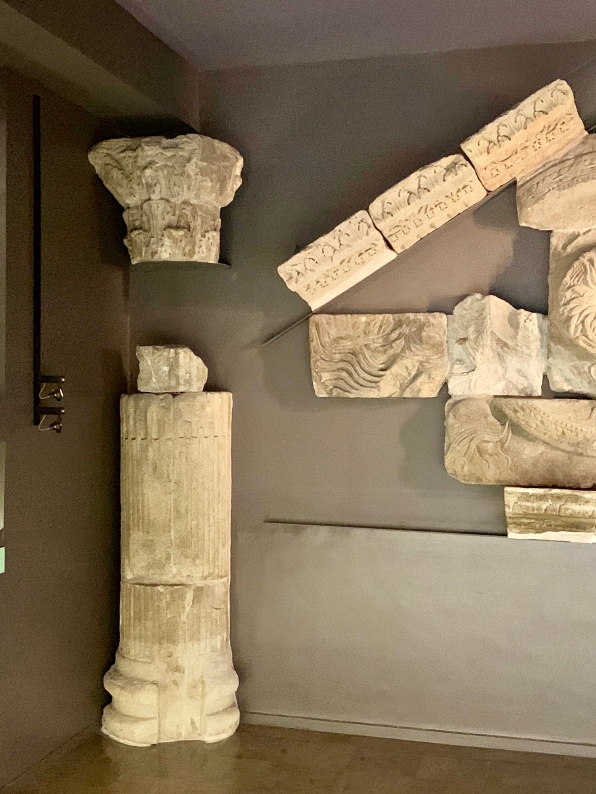 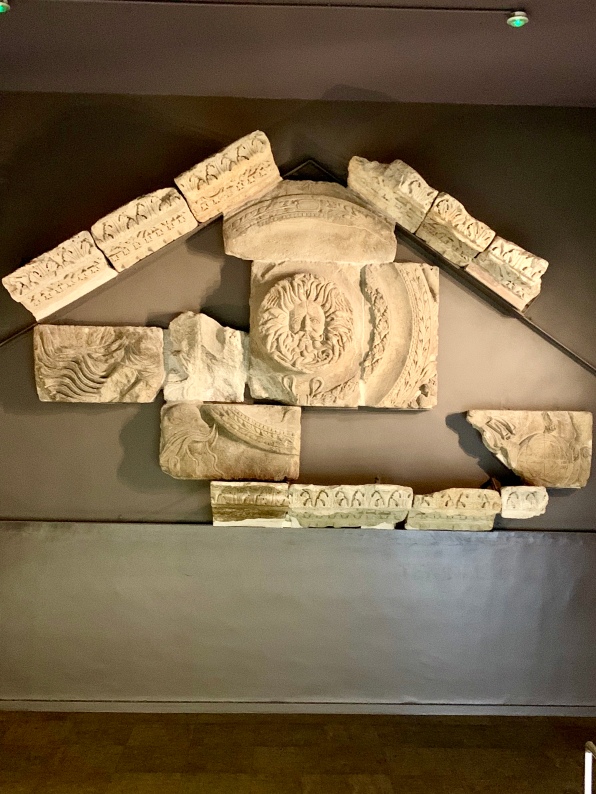 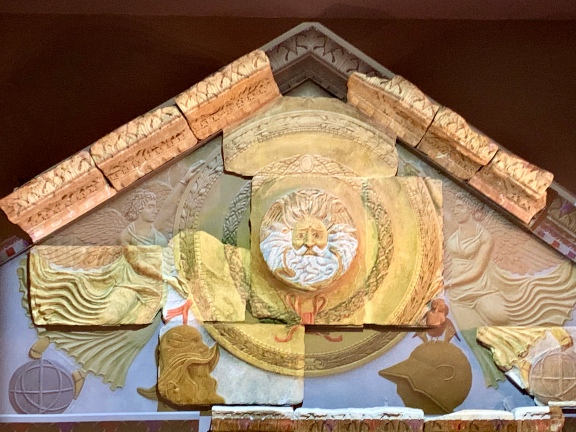 You then move into the Temple Courtyard and the Buttress of Spring Building. The massive stone blocks formed a buttress supporting a corner of the building over the Sacred Spring. 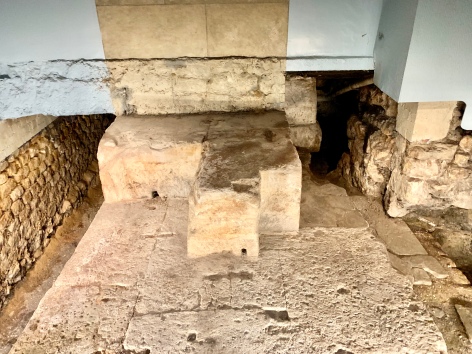 When you enter the Temple Courtyard you will come across the Altar – this sacrificial altar was the focus for public worship where priests conducted ceremonies and animal sacrifices. two of the cornerstones are in their original positions and a third lies close to the altar where it was found in 1965. It is likely that the altar was painted but it isn’t clear if the panels between the cornerstones were plain or decorated with carvings. 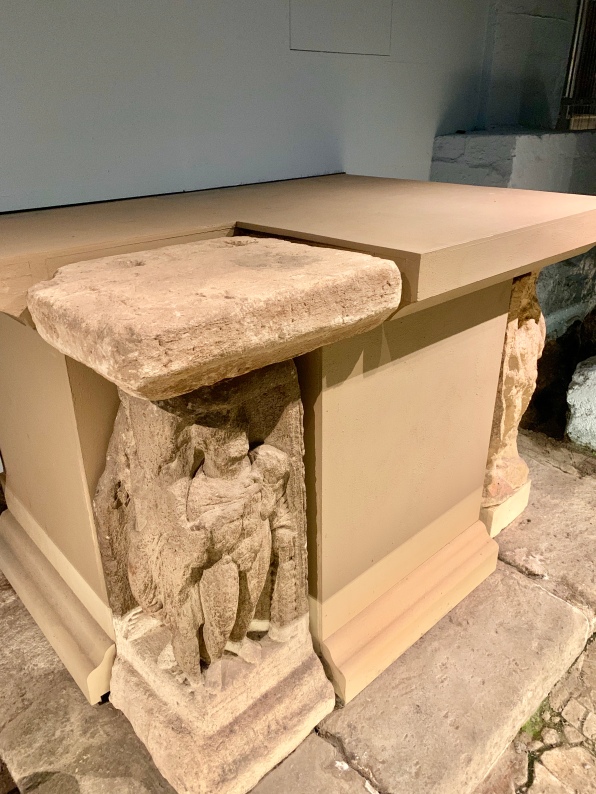 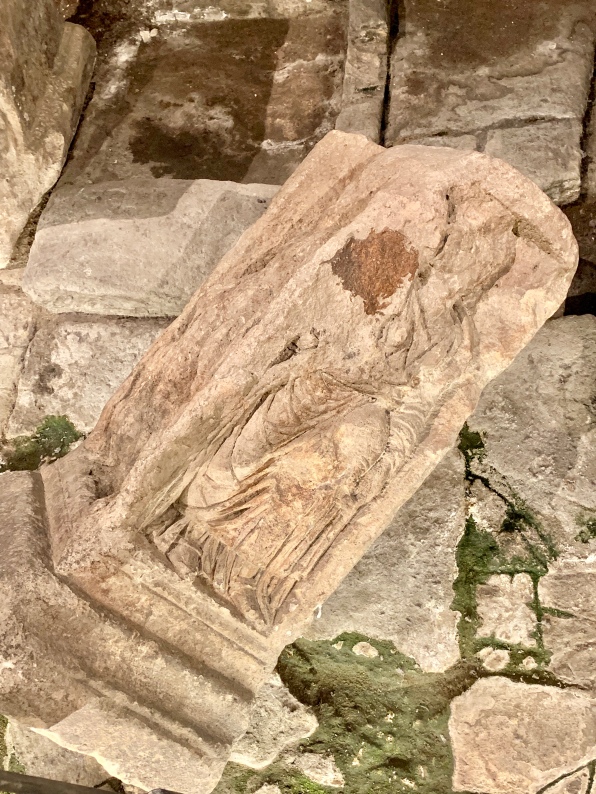 You will also see the Haruspex Stone – after a sacrifice, the Temple haruspex removed organs from the animal’s body and studied these to predict the future. 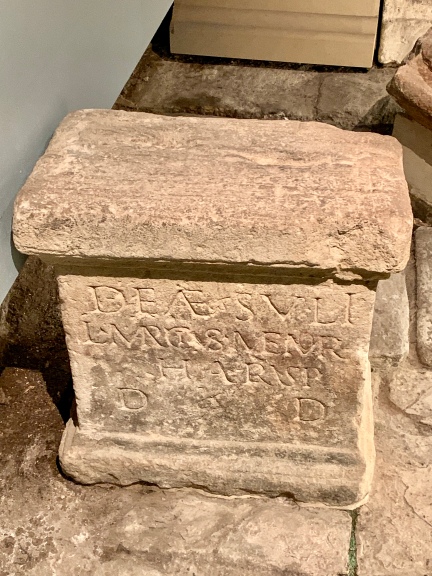 Next you will come across the Sacred Spring – the Roman’s would erect altars at places where great streams appear from hidden sources – they would honour springs of hot water as divine. 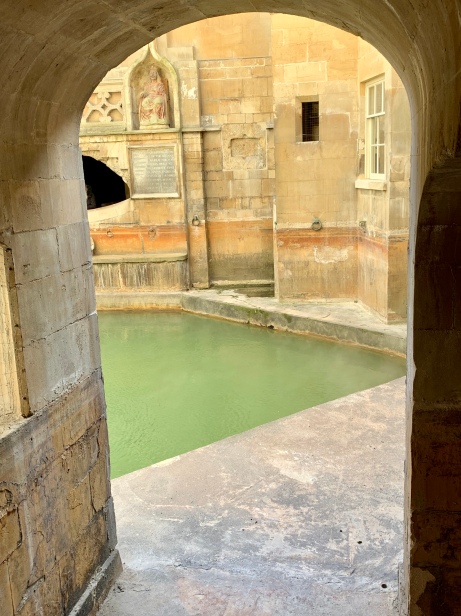 In the 12th Century the Kings Bath was built within the Roman ruins. In the 18th Century the Pump Room was built. There were steps, or “slips” outside the windows which allowed bathers into the water from passages beneath the Pump Room. Unfortunately, the ledge around the Spring is all that remains of the King’s Bath floor. The orange stain marks the former water level. In 1979, the floor was removed and the water lowered to the “Roman level”, approximately four metres below today’s level. 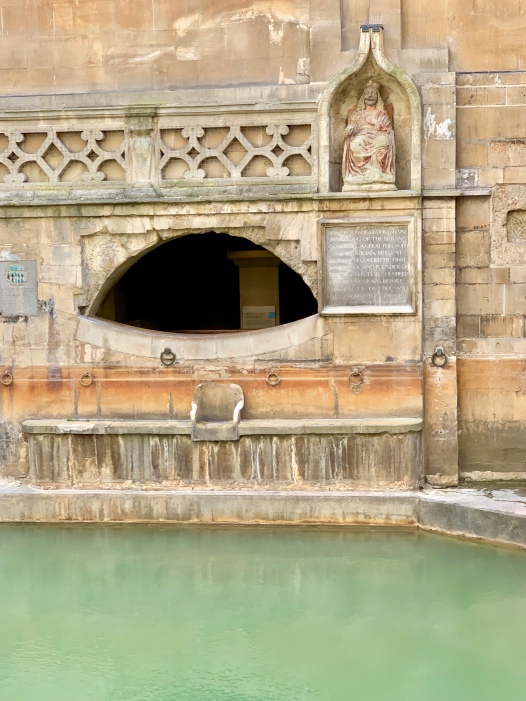 After viewing hundreds of Roman artifacts and learning about Roman brick making and sluice gates, you can view the Great Bath at ground level and then go on to view the East Baths. 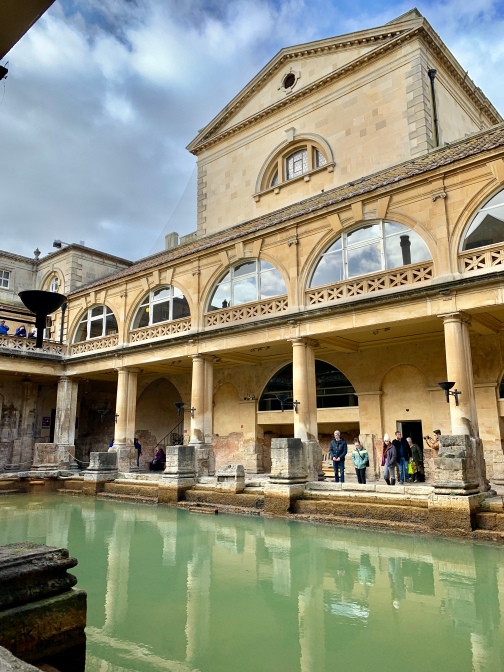 Back in those days, as you moved through the spaces in the East Baths the rooms went from cool to very hot. Mixed bathing was often practiced in the Roman world, but not always. Here you will find similar rooms to the East and West of the Great Bath which allowed men and women to bathe simultaneously but separately. There would have been smells of massage oils and hot steam greeting the bathers as they entered the large heated rooms. 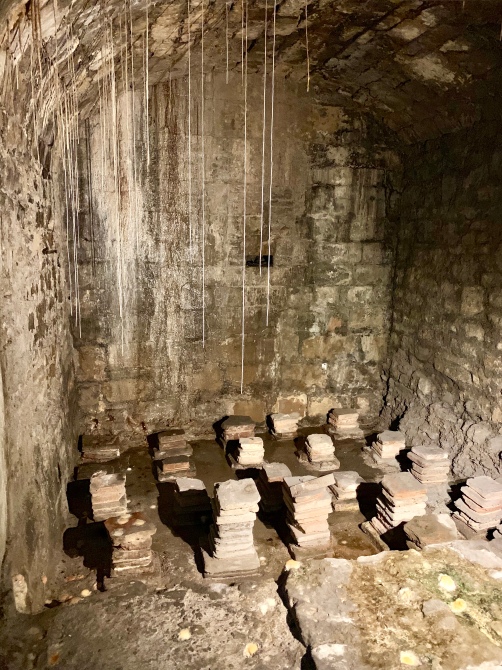 Noble and poor, slaves and free would have all used these baths together. Attendants were there to help with food and drink and slaves would have accompanied the rich, fetching and carrying their belongings. Common snacks included oysters, sausages and bread. 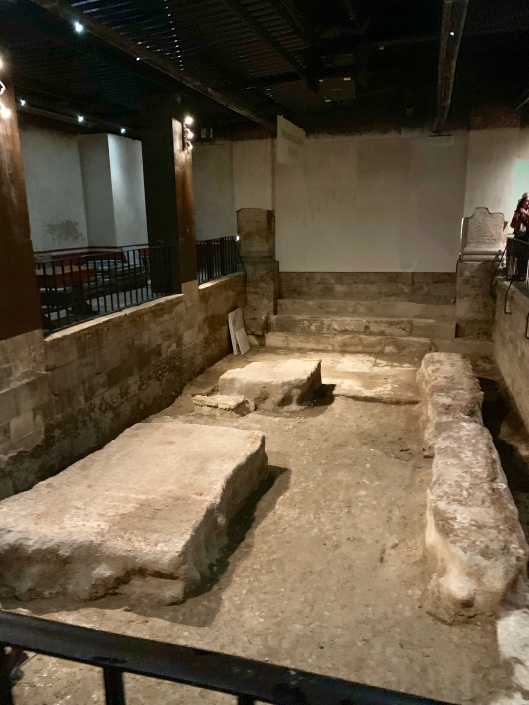 People would move from the changing rooms (apodyterium), to a warm room known as a tepidarium, and onto the hottest room, the caladium. There were also shallow bathing pools known as sudatoria, two small deep immersion pools known as balnea and a large cool swimming pool called a natatio.

After all this, you can try a sip of the hot spring water – not the best tasting but worth a try for the experience!

And finally is the beautiful Cold Bath – this beautiful preserved bath, with two sets of steps leading down to it, was probably fed from a cold water spring higher up the hillside  above the Roman Baths. The two large brick pillars were built to support the road above when the electric trams were introduced to Bathing 1904. 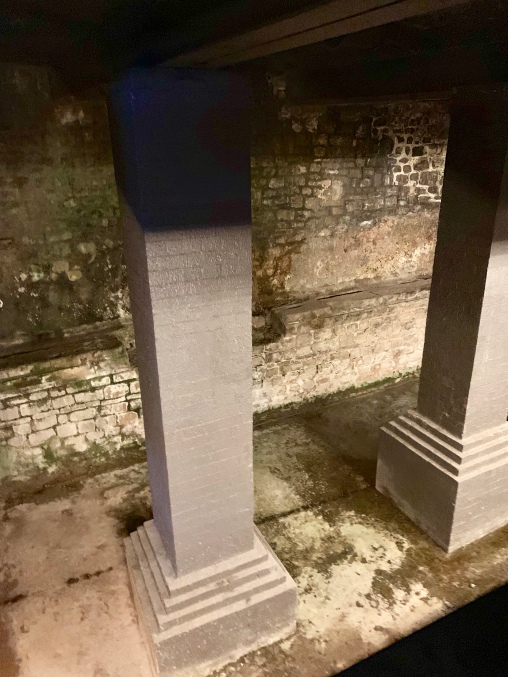 Plus, when you are on the Terrace when you first arrive, make sure you take a stunning photo of Bath Abbey overlooking the Baths! 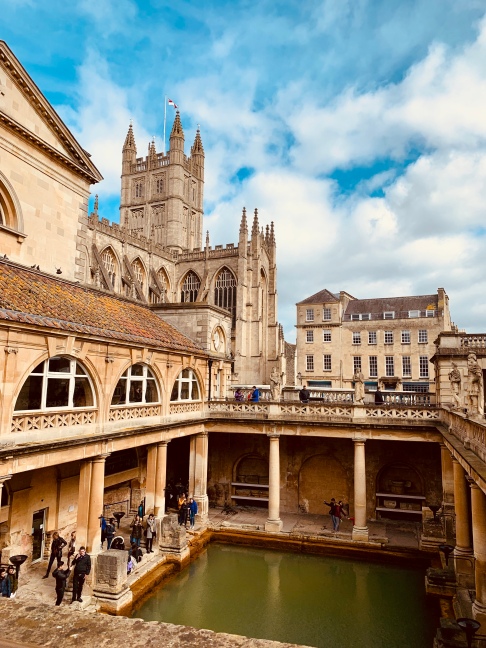