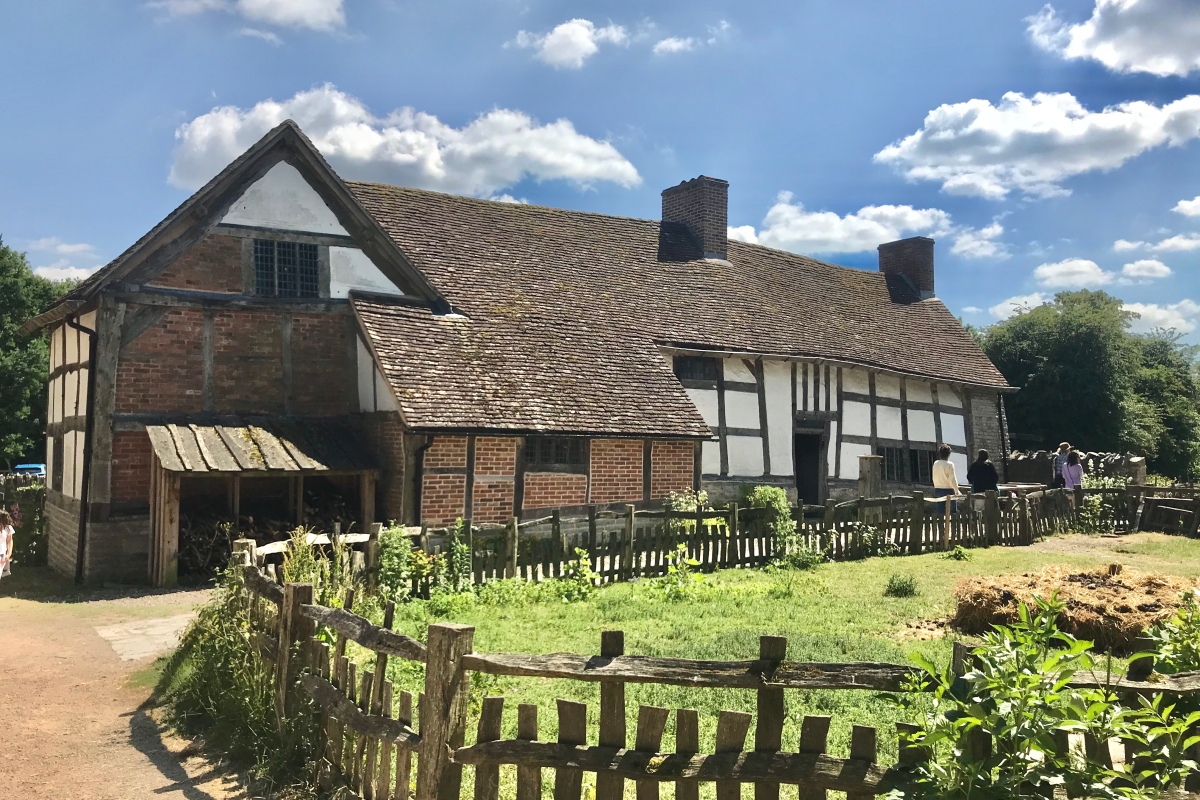 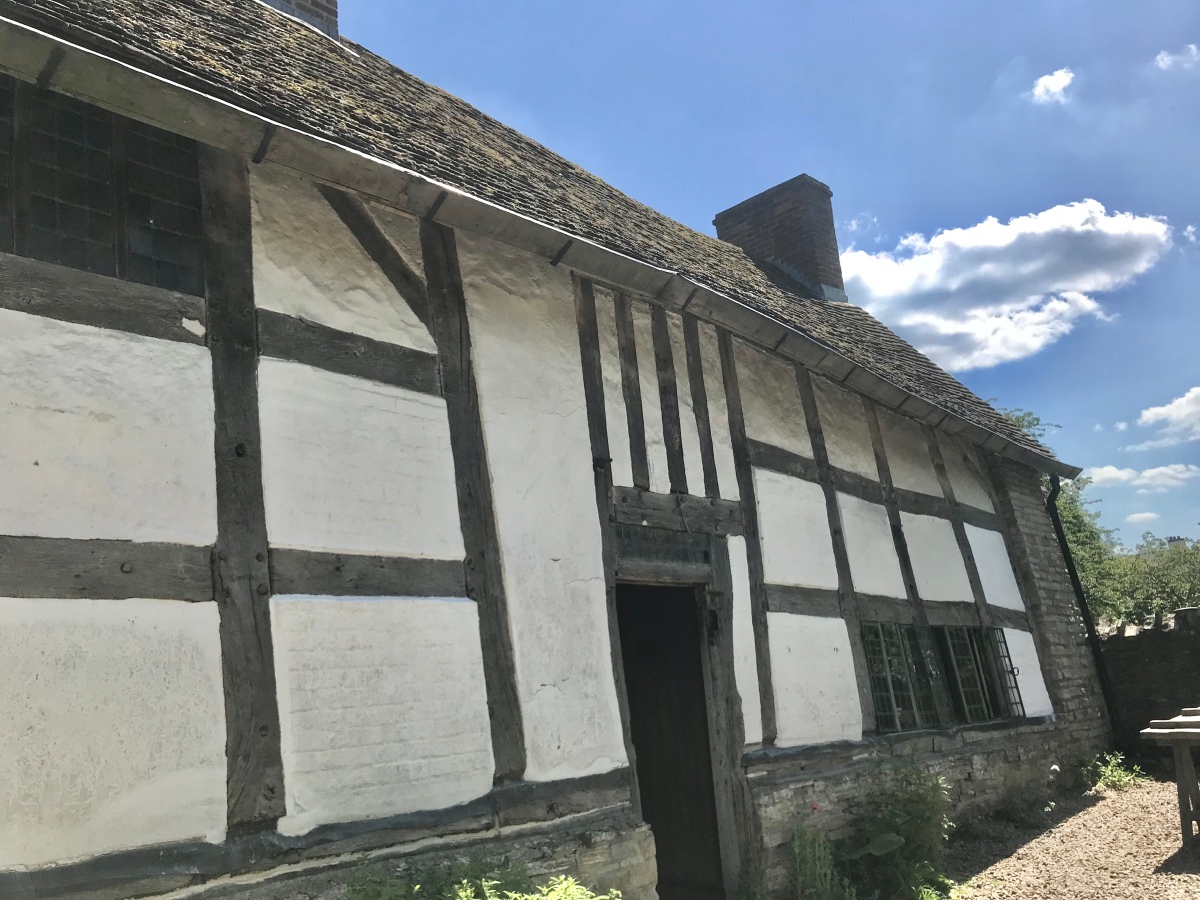 I am hoping that you have read my blogs about my last couple of visits to stratford upon avon and Anne Hathaway’s Cottage over the last few months. As part of the full story ticket we purchased, you can have access to Shakespeare’s Birthplace, Shakespeare’s New Place, Hall’s Croft, Anne Hathaway’s Cottage and Mary Arden’s Farm, as many times as you like for a full 12 months! If you are visiting Stratford, you must also pay a visit to the Holy Trinity Church which is of course the final resting place for William Shakespeare himself.

Mary Arden’s Farm was the last place on our list to visit and, once again, we chose a beautiful summers day to visit!

The Arden Family farmhouse was the childhood home of William Shakespeare’s mother, Mary. The house was built in around 1514 and was owned by Lord Abergavenny, and tenanted to farmer Robert Arden (Shakespeare’s grandfather) and his family. Mary was born in about 1535 and was the youngest of 8 sisters. All of them grew up in this farmhouse.

At the time, it was not unusual for children to die through illnesses, but Mary and her sisters all lived to become adults and she grew up as part of a busy working household. Mary’s mother died in 1548 and her father then married a widow who also had four children, so the farmhouse would have been fit to bursting, even though some of Mary’s sisters had already left home by this point!

In 1556, Robert Arden died, leaving his second wife, Agnes, the tenancy of the house and farmland. Mary was left with some additional land and a sum of money at this point. In 1567, Agnes Arden handed the property over to her son-in-law John Fulwood (John Fulwood was married to Agnes’ youngest child) and she continued to live in the house until she died in 1581.

By 1623 the Fulwood family continued to hold the tenancy. Avery Fulwood was the tenant and the farm was recorded as being 147 acres in size. 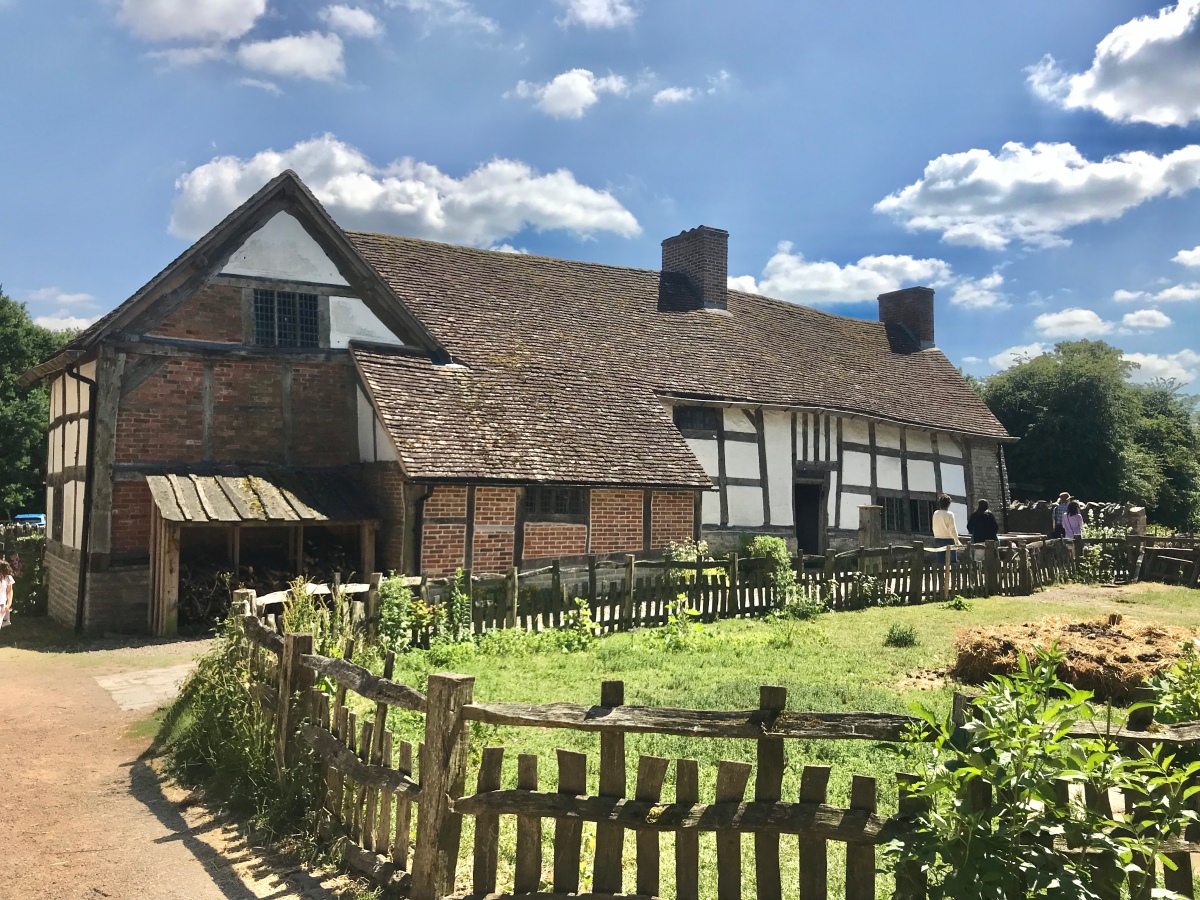 In 1662, Lord Abergavenny sold off the farm to pay off debts. Mary Arden’s house, along with the147 acres, was bought by Anne Hunt for £300. At the time this happened, Mary Fulwood was listed as the tenant. Later in that year, it was purchased by the Loggin family of Clifford Chambers.

In 1738 the Loggin family sold the property to Edward Kendrick, rector of nearby Billesley. He made the purchase to increase the income of Billesley parish throughout the rent of the property. The property then became known as Glebe Farm (Glebe means land proving income to the clergy).

In 1742 Kendrick acquired a barn and additional land. This was probably land originally left by Robert Arden to Mary in his will of 1556. Glebe Farm now consisted of a house and about 188 acres of land.

By 1769, Glebe Farm was one of the largest farms in Wilmcote. The other was neighbouring Palmers Farm (which was actually mistaken for Mary Arden’s Farm for several years until it became apparent the building next door was actually where Mary Arden had resided).

1925 Glebe farmhouse and land still belonged to the rectory of Billesley parish at this date. In this year the farm was sold by the Church Commissioners and split up.

In 1967 the Shakespeare Birthplace Trust purchased the farmhouse with 3 acres of land, tenant George Holmes was living there at the time.

In 1978 the Shakespeare Birthplace Trust took possession of Glebe Farmhouse following the death of George Holmes.

In 2000, Glebe Farm was finally identified as the Arden family home after it previously being believed that they lived at neighbouring Palmer’s Farmhouse.

Mary and John Shakespeare had 8 children, 3 of whom died at a young age. William Shakespeare was born in 1564. When William was very young there was an outbreak of plague in Stratford Upon Avon which he was lucky to survive. It is not known for certain, but is thought that Mary brought William to Wilmcote in the hope of protecting him from the outbreak.

Mary lived long enough to see William rich and successful in the 1590’s. It is possible that following John’s death in 1601, she moved into William’s grand home, New Place, before she died in 1608.

When you arrive at the Farm you are greeted by a range of animals including cows, horses, goats, a donkey and some stunning birds of prey! 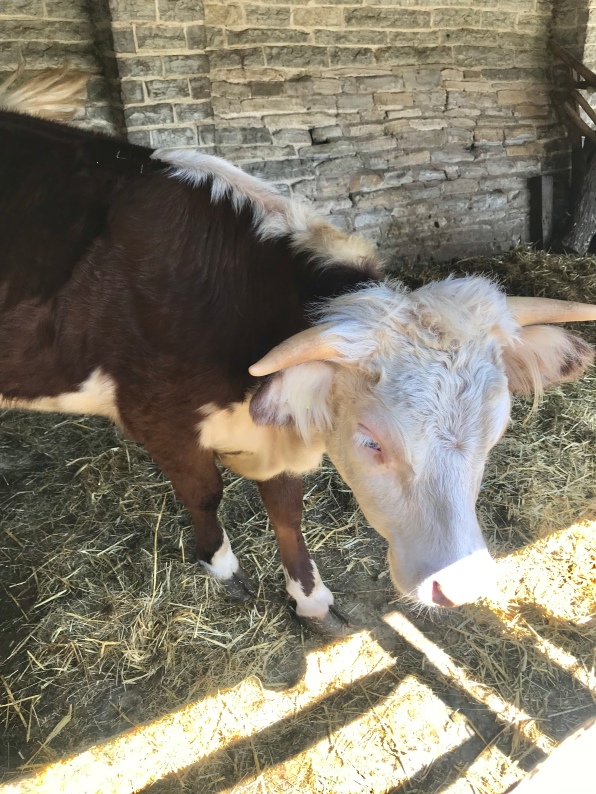 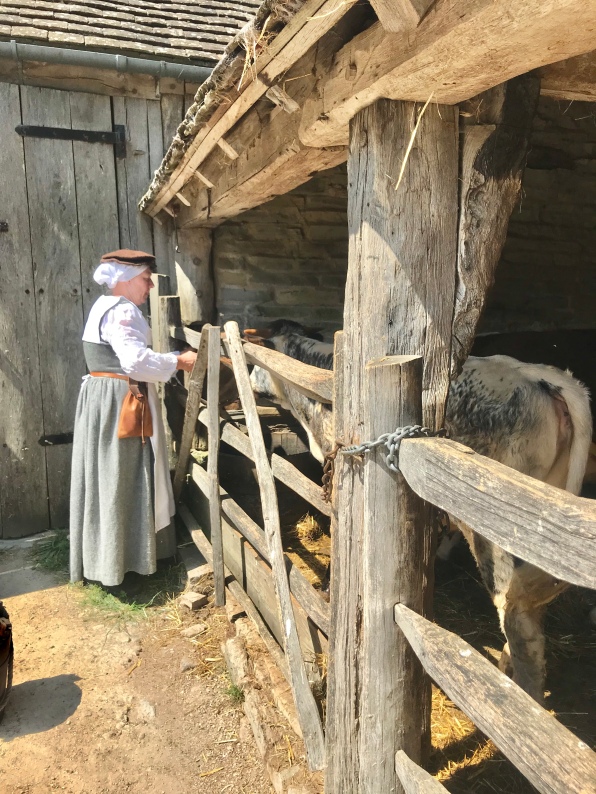 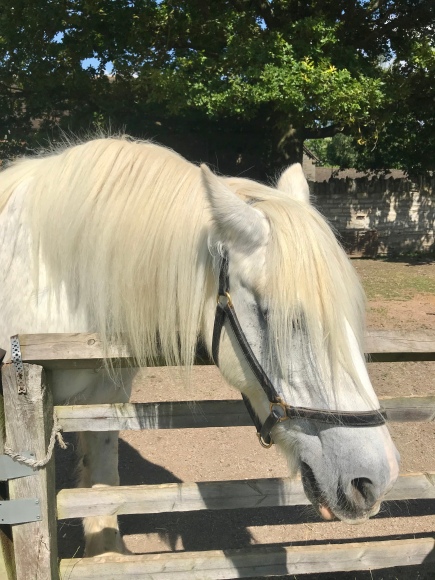 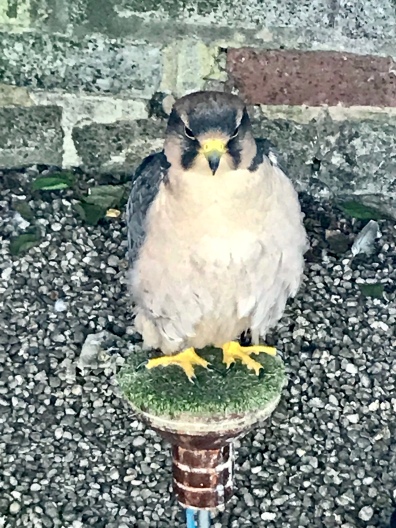 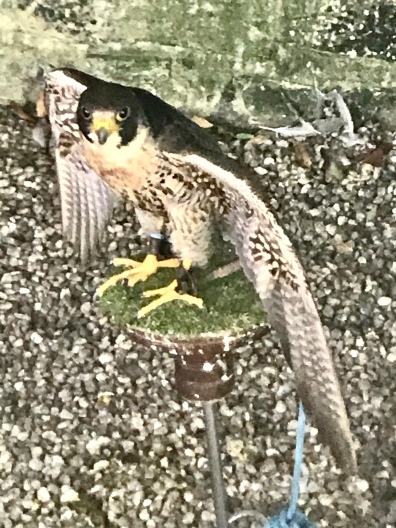 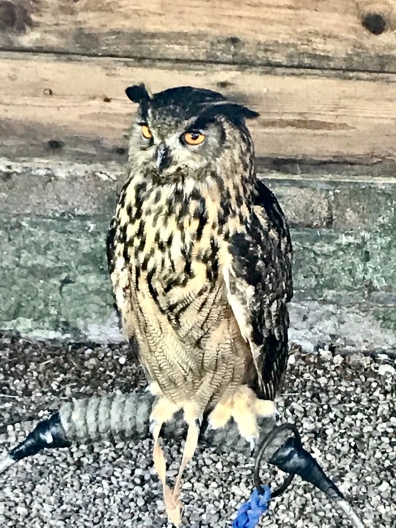 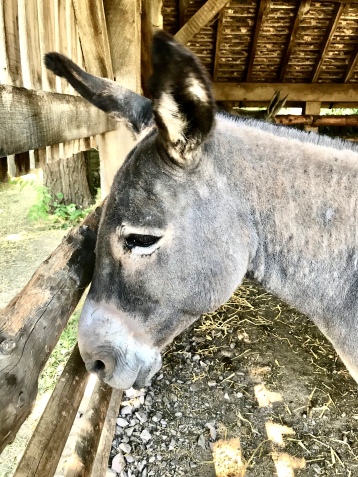 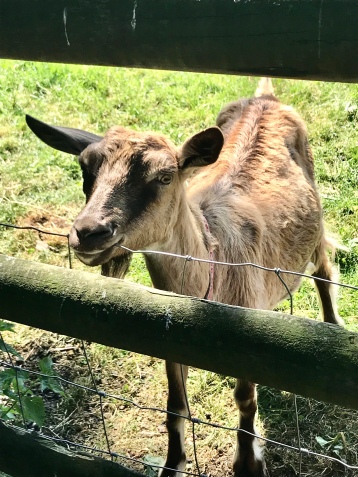 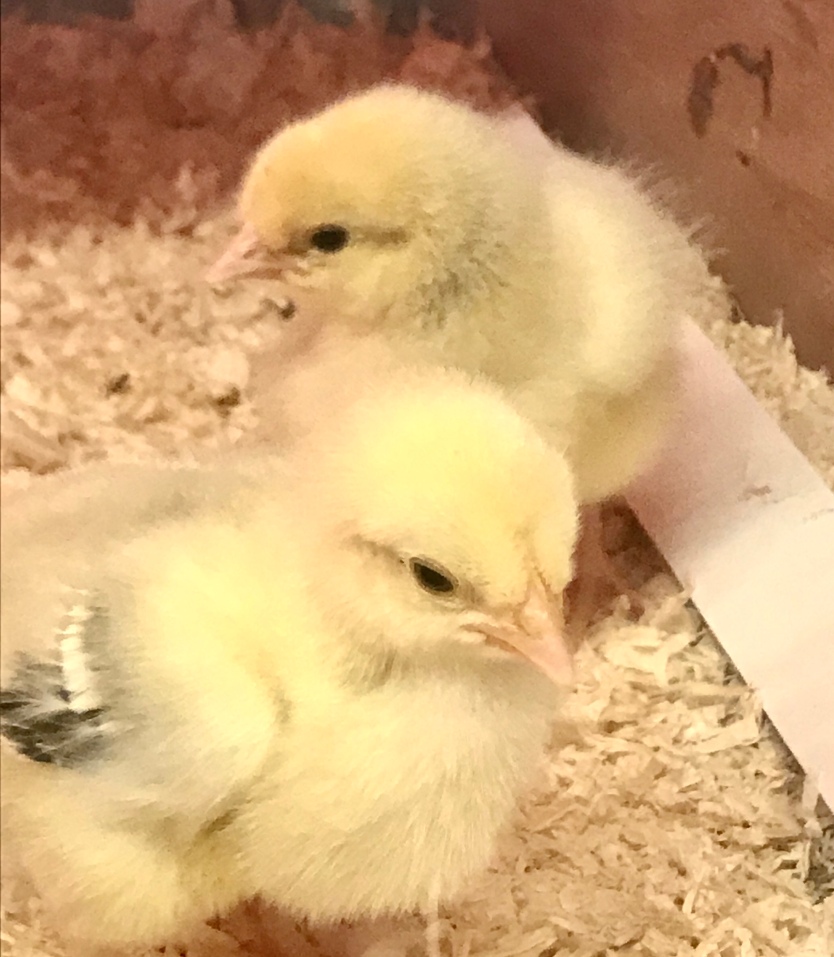 You can explore the inside of the farmhouse, which has been set up to look as it would have done back then, with huge open fireplaces and wonky walls and corridors! 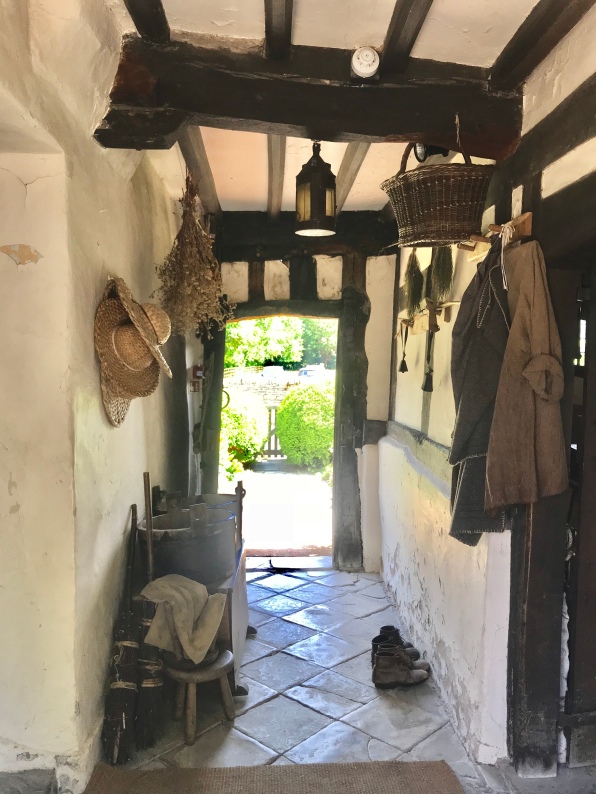 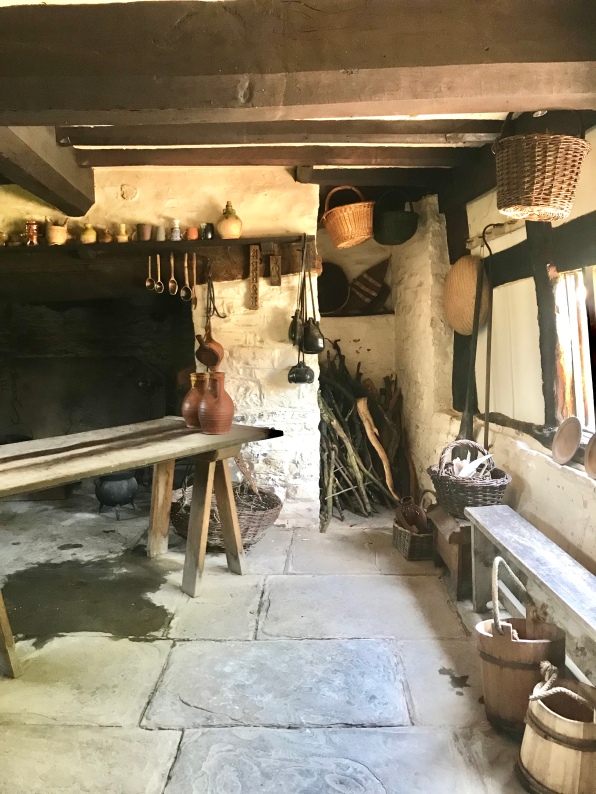 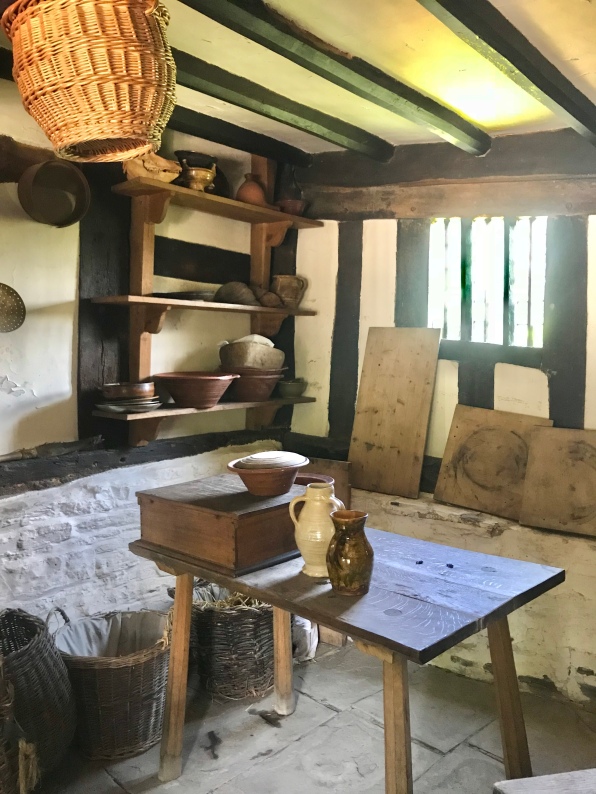 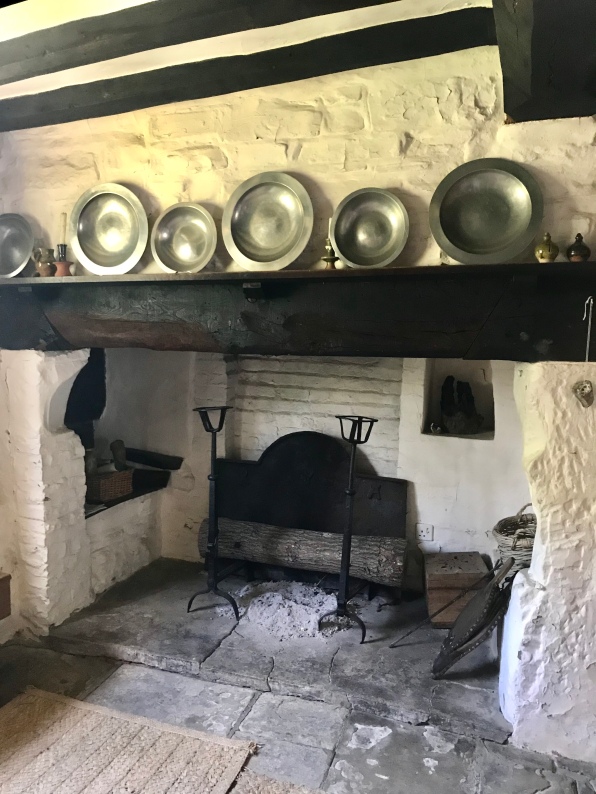 The first floor, above the hall, was most likely added sometime in the 1600’s. Originally the room would have been much bigger as the chimney stack was smaller. People lived in the house up until the 1970’s and over the years it has been altered an extended to suit their needs.

The first floor chamber was the only first floor space in the 1500’s and it would have been reached by a ladder until a staircase was added in the 1600’s. It is not known if the room was originally fully floored or if there was only a sleeping shelf. 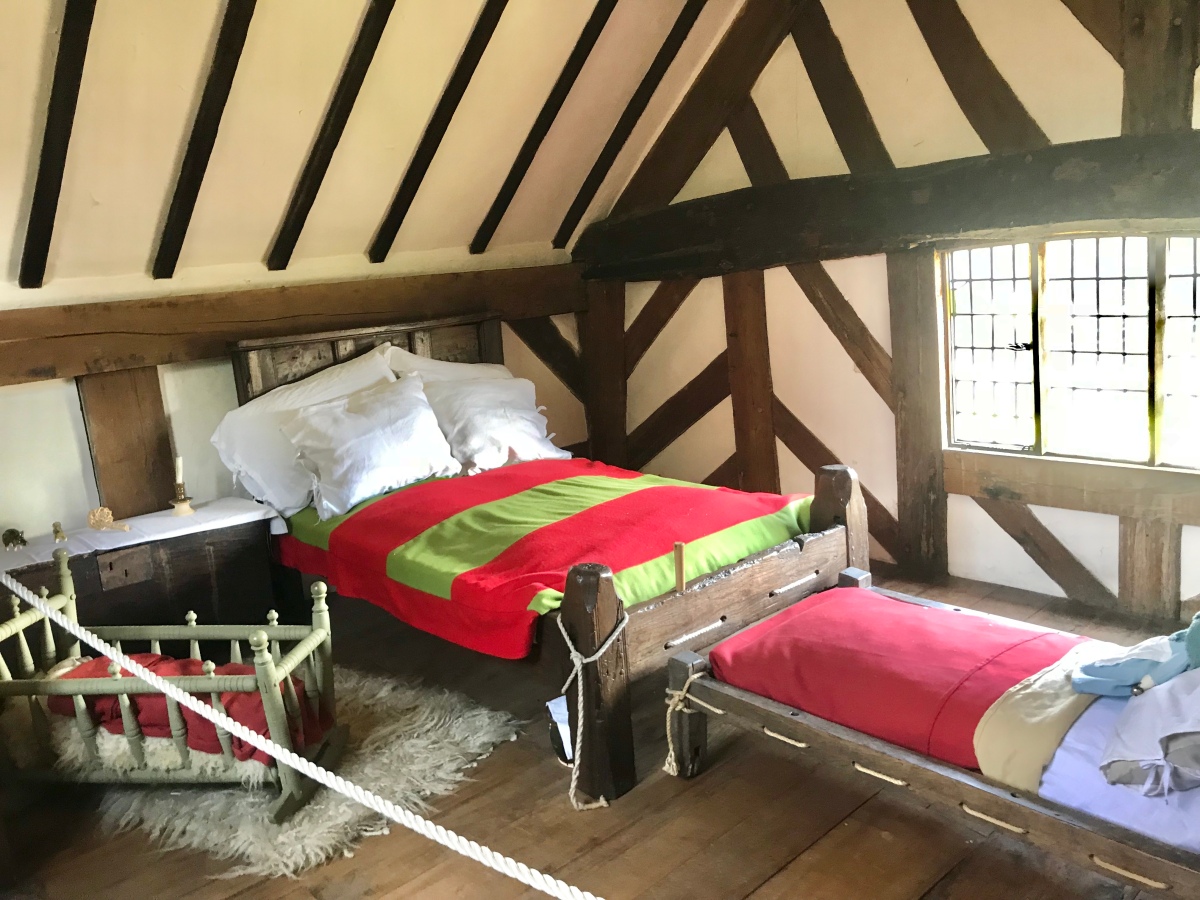 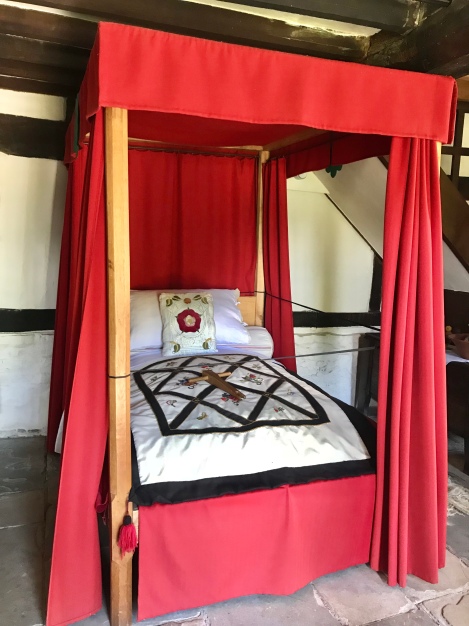 On the beam in the doorway you can see some dark brown teardrop shaped marks which were caused by candles held so close to the wood that they burnt it. Marks like this were often found on the timbers of older buildings. It is possible they were made by accident, however they may have been created deliberately, perhaps in the belief they would protect the building from burning down. 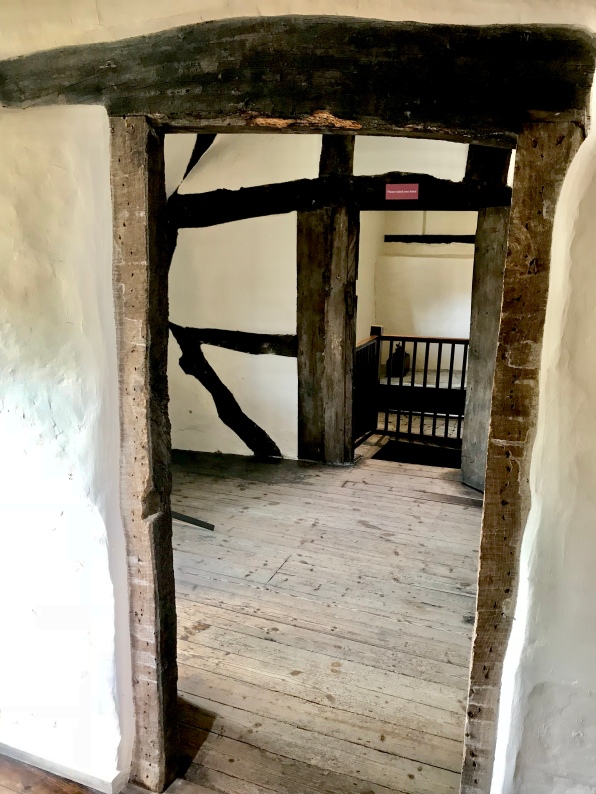 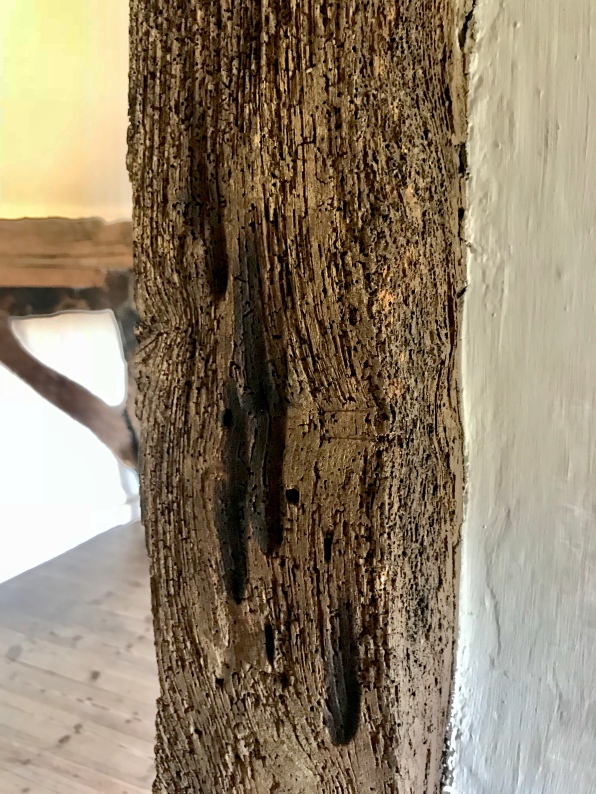 Theres also plenty to do outside in the grounds of the farm. A game of giant chess anyone?

You can also visit Wheelwrights workshop. The workshop was opened to visitors again last year after being used as a storage space for a number of years. It houses a collection of late nineteenth and early twentieth century wheelwrights and coppers tools.

Alongside the blacksmith, the wheelwright, carpenter and cooper were essential craftsmen in the village community.

The carpenter met a variety of needs in the home and on the farm in addition to playing an important part in the construction of buildings. he made tools, furniture and domestic fittings, as well as coffins, and acted as undertaker.

The cooper’s speciality was the making of barrels of varying shapes and sizes needed for the storage of beer, cider or wine and of dry goods such as flour, salt-fish, lime and crockery. Great skill was required to judge the number and dimensions of the oak staves required to make a cask.

The wheelwright made and repaired wagons, carts and other farm implements. Seasoned elm, oak, and ash were used to provide the hub, spoke and rim felloes of a wheel. An iron tyre, fitted when hot, held these parts together when assembled. 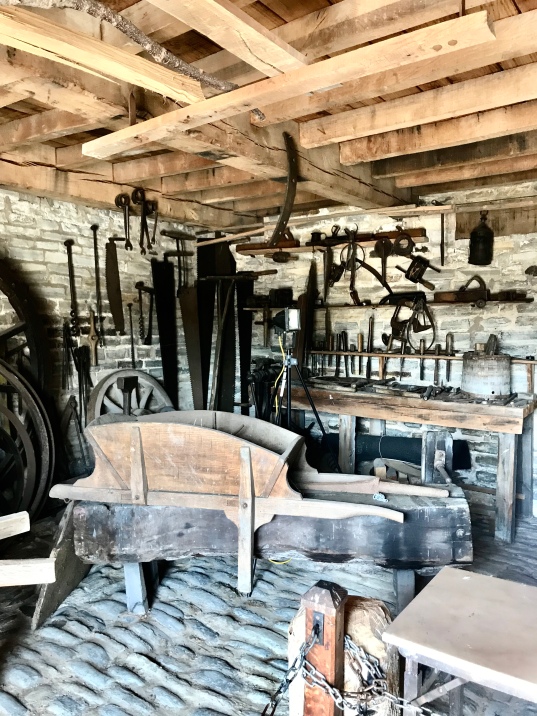 And if all of this is not enough for you, you can also go for a lovely long walk in the wild flower meadow, past the pigs and crops and lower dovehouse pasture. 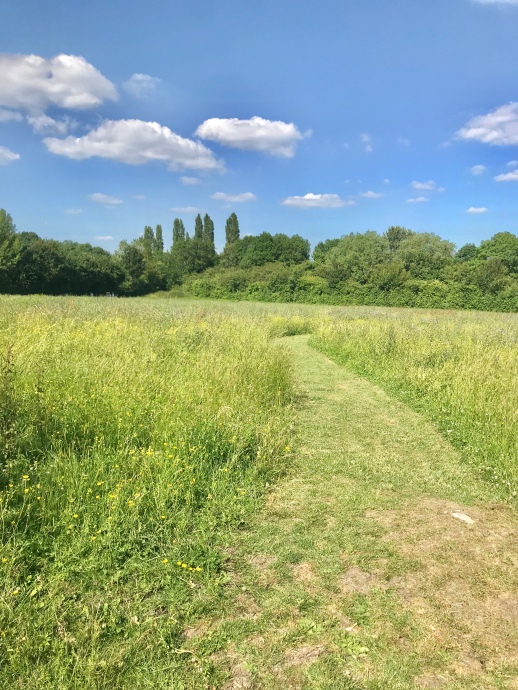 You can also try your hand at archery, watch some goose herding or a bird of prey display and visit the adventure playground.

So as you can see there is plenty to see and do here and you can easily fill a day seeing everything Mary Arden’s Farm has to offer! And don’t forget, if you buy the full story ticket you can come back as many times as you like for a whole year!