We visited Chatsworth House in December as part of a trip through Newmarket Holidays, we spent one day at Chatsworth House and then spent the evening in a nearby hotel and the following day shopping in Chester.

Chatsworth is home to the Duke and Duchess of Devonshire, and has been passed down through 16 generations of the Cavendish family.

There are over 30 rooms to explore at Chatsworth, from the magnificent Painted Hall, regal State Rooms, restored Sketch Galleries and beautiful Sculpture Gallery.

Chatsworth House is built on sloping ground which is lower on the north and west sides than on the south and east sides. The main entrance was on the west front, which had four turrets, and the great hall was on the east side of the courtyard, where the Painted Hall remains the focus of the house to this day.

Chatsworth has 126 rooms, with nearly 100 of them closed to visitors. The house is adapted to allow the family to live privately while the house is open to the public (they occupy rooms on the ground and first floors of the south front, all three floors of the west front, and the upper two floors of the north front). Staircases in the northeast corner of the main block and in a turret in the east front enable them to get around the house without coming across members of the public!

Chatsworth’s gardens attract around 300,000 visitors a year. It has a huge range of different features from six different centuries and covers over 105 acres!!

The Cascade and Cascade House is a set of stone steps over which water flows from a set of fountains at the top. It was built in 1696 and rebuilt on a grander scale in 1701. In 1703 a grand baroque Temple or Cascade House designed by Thomas Archer was added at the top. In 2004 the Cascade was even voted the best water feature in England by a panel of 45 garden experts! It has 24 cut steps, each slightly different and with a variety of textures so that each gives a different sound when water runs over and down them. 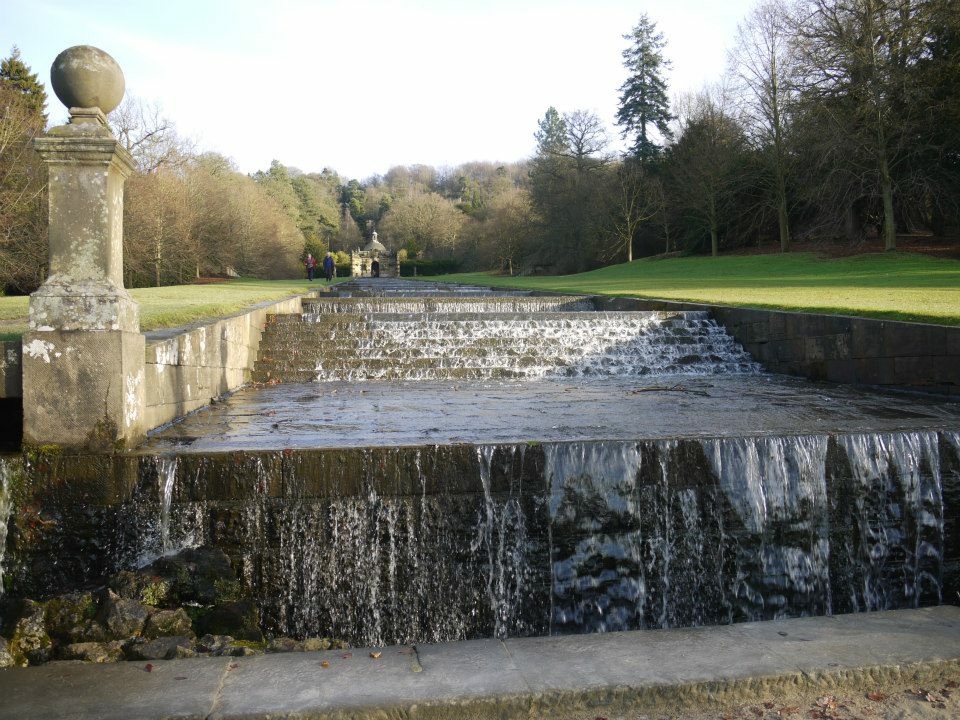 The Seahorse Fountain is a sculptural fountain in a circular pond on the lawn between the house and the Canal Pond.

The Willow Tree Fountain is an imitation tree that squirts water on the unsuspecting from its branches!

The First Duke’s greenhouse is a long, low building with ten arched windows and a temple-like centrepiece. It has been moved from its original site overlooking the 1st Duke’s bowling green to the northern edge of the main lawn and is now fronted by a rose garden.

Flora’s Temple is a classical temple built in 1695 and moved to its present site at the northern end of the broad walk in 1760. It contains a statue of the goddess Flora by Caius Gabriel Cibber.

The West Garden—now the family’s private garden with modern planting in a three-section formal structure.

The Emperor Fountain: An eight-acre lake was dug on the moors 350 feet above the house to supply the natural water pressure. The work was finished in just six months,  and the resulting water jet is on record as reaching a height of 296 feet (90 m)!!

Although it was magical visiting Chatsworth in December, the house was decorated inside from top to bottom with Christmas decorations which was lovely, but it was also a shame because in some places you couldn’t see the traditional decor and ornaments, so in my opinion it would be good to visit at another time of the year in order to view the “real” Chatsworth House.

The house is open mainly from 11am until 5pm but double check the dates you are going for more accurate opening times depending on the season. Pre-book your tickets here. My suggestion is to get there as early as possible as there really is so much to see and lots of ground to cover, especially as you will need to stop for some lunch at some point!!

You can read even more information on Chatsworth House here.